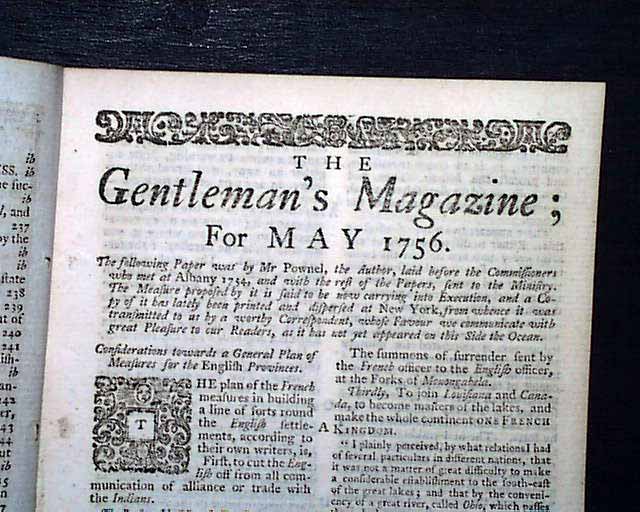 Item # 649135
GENTLEMAN'S MAGAZINE, London, May, 1756  The most significant item in this issue is: "His Majesty's Declaration of War Against the French King" which was the official beginning of the French & Indian War. This text takes just over a fullpg. (see) This is a very significant document, being the first in a series of American war declaration issues which would include the Revolutionary War, War of 1812, Mexican War, Civil War, & the others which followed.
The first page has interesting text on "Consideration towards a General Plan of Measures for the English Provinces" which begins: "The plan of the French measures in building a line of forts round the English settlements...is, first, to cut the English off from all communication of alliance or trade with the Indians..." and what follows are the reasons stated for building  forts, including: "The Scheme of building the Fort at Niagara" and "The Design of building the Fort Cannanistigoyan on the Lake Superior", and also text which includes: "The Summons of surrender sent by the French officer to the English officer at the forks of Monongahelia." followed by: "Thirdly, to join Louisiana & Canada, to become masters of the lakes & make the whole continent one French kingdom..." with more  detail on page 2.
Another article within has the heading: "On the Conduct of the French in America" which takes nearly 3 pgs. Near the back is a bit headed: "American News" (see).
No plates or maps are called for.
Complete in 56 pages, 5 by 8 in. full title/index pg., in nice condition.