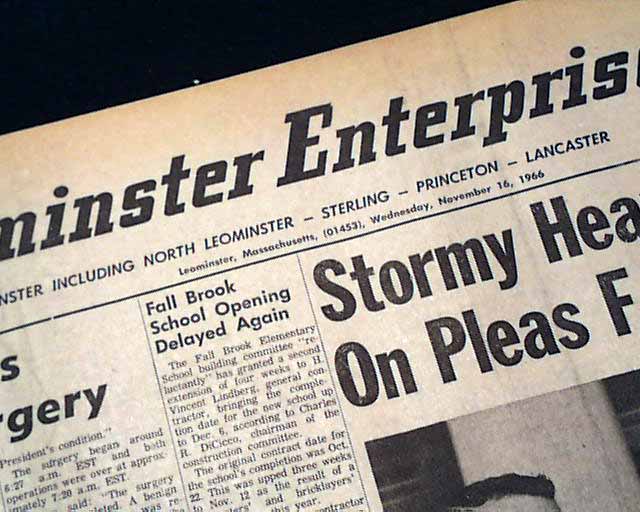 This 18 page newspaper has a three column headline on page 5:
"National League MVP Awarded To Clemente"

Other news of the day throughout. Small binding holes along the spine, otherwise in good condition.

wikipedia notes: Roberto Clemente Walker (August 18, 1934 – December 31, 1972) was a professional baseball player and a Major League Baseball right fielder. He was born in Carolina, Puerto Rico, the youngest of seven children. On November 14, 1964, he married Vera Zabala at San Fernando Church in Carolina. The couple had three children: Roberto Jr., Luis Roberto and Enrique Roberto. He began his professional career playing with the Santurce Crabbers in the Puerto Rican Professional Baseball League (LBPPR). While he was playing in Puerto Rico, the Brooklyn Dodgers offered him a contract to play with the Montreal Royals. Clemente accepted the offer and was active with the team until he was drafted by the Pittsburgh Pirates in the Major League Baseball draft that took place on November 22, 1954.

Clemente played eighteen seasons in Major League Baseball from 1955 to 1972, all with Pittsburgh. He was awarded the National League’s Most Valuable Player Award in 1966. During the course of his career, Clemente was selected to participate in the league's All Star Game on twelve occasions. He won twelve Gold Glove Awards and led the league in batting average four different seasons. He was involved in charity work both in Puerto Rico and other Latin American countries, often delivering baseball equipment and food to them. He died in an aviation accident on December 31, 1972, while en route to deliver aid to earthquake victims in Nicaragua. His body was never recovered. He was elected to the Hall of Fame posthumously in 1973, thus becoming the first Latin American to be selected and the only current Hall of Famer for whom the mandatory five year waiting period was waived since the wait was instituted in 1954. Clemente is also the first Hispanic to win a World Series as a starter (1960), win a league MVP award (1966) and win a World Series MVP award (1971).