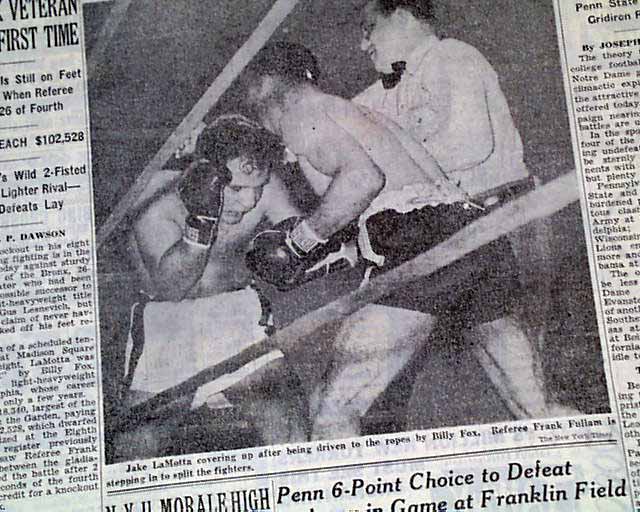 This 30 page newspaper has a banner headline on page 12: "Fox Knocks Out LaMotta in Fourth Round Before Crowd of 18,340 at Garden" with subheads that include: "NEW YORK VETERAN STOPPED FIRST TIME" and more with a nice three column action photo.

Nice to have in this famous title.

Tells of the famous fixed fight done for the mafia. Rag edition in nice condition.

wikipedia notes: LaMotta, who compiled a record of 83 wins, 19 losses and four draws with 30 wins by way of knockout, was the first man to beat Sugar Ray Robinson,[1] knocking him down in the first round and outpointing him over the course of 10 rounds during the second fight of their legendary six-bout rivalry.

On 14 November 1947, he was knocked out in four rounds by Billy Fox.[1] The New York State Athletic Commission withheld purses for the fight and suspended LaMotta. The fight with Fox would come back to haunt LaMotta later in life, during a hearing with the Federal Bureau of Investigation.

In the testimony and his later book, LaMotta admitted to throwing the fight in order to gain favor with the Mafia. All involved agreed the fix was obvious and their staging inept. As LaMotta wrote,

The first round, a couple of belts to his head, and I see a glassy look coming over his eyes. Jesus Christ, a couple of jabs and he's going to fall down? I began to panic a little. I was supposed to be throwing a fight to this guy, and it looked like I was going to end up holding him on his feet ... By [the fourth round], if there was anybody in the Garden who didn't know what was happening, he must have been dead drunk."[2]

The thrown fight and a payment of $20,000 to the Mafia got LaMotta his title bout against Marcel Cerdan.