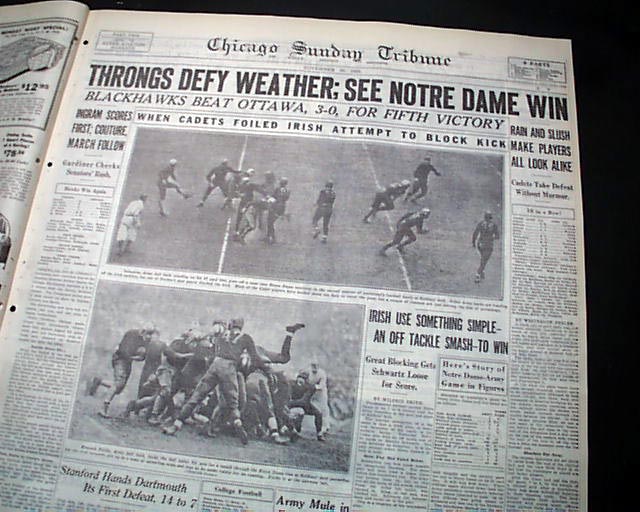 * Notre Dame Fighting Irish vs. Army Cadets
* 2nd to last collegiate game coached by Knute Rockne
* ND to be National Champions for 1930 season
* The prime rivalry at this time in the sport
* Great item for display - NCAA college football
* From the city where the game was played (very rare)

Here is truly a terrific issue on Notre Dame football. The front page has a nice banner headline that announces: "110,000 SEE ARMY LOSE, 7-6" with subheads. (see) Unusual for such a nice headline concerning sports on the front page of any newspaper. Rare as such.
The front page of the sport's section (inside) has another nice banner headline: "THRONGS DEFY WEATHER; SEE NOTRE DAME WIN" with subheads, two related photos and lineups. More on the next page. And the game was played in Chicago, at Soldier's Field (neutral site), extremely rare as such.
First report coverage on Notre Dame's 2nd last last game of the 1930 season. They were National Champions for that year. This was also Knute Rocke's 2nd to last game as head coach. He would be killed in a airplane crash the following spring. This is probably one of the best issues concerning Notre Dame football that I have ever seen.
Complete section 1 & 2 (sports) with 34 pages, rag edition n very nice condition. A few small binding holes along the spine.