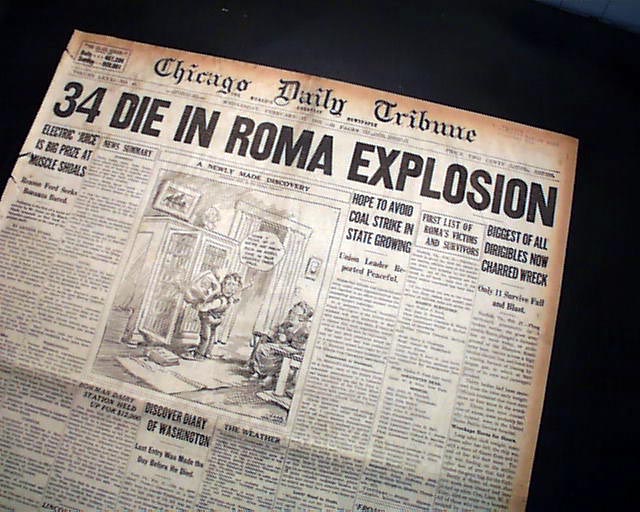 The front page has a nice banner headline: "34 DIE IN ROMA EXPLOSION" with subheads. (see) Nice for display. More on page 3 with photo. Always nice to have notable events in history reported in this World famous publication.
Complete with 28 pages, light toning and a little wear at the margins, generally good. Should be handled with care.

wikipedia notes: The United States purchased the Roma from the Italian government for $250,000 in 1921. It was previously designated T34. It was the largest semi rigid airship in the world. It crashed in Norfolk, Virginia during test flights on February 21, 1922. The crash was believed to be caused by failure of the Roma's box rudder system, which allowed it to maneuver over tight areas. The ship contacted high voltage lines, and burst into flames. 34 people were killed, 8 were injured, and 3 escaped unharmed. The event marked the greatest disaster in American aeronautics to that time. The ship was piloted by Captain Dale Mabry. This was the last hydrogen filled airship used by the US; all future ships were filled with helium