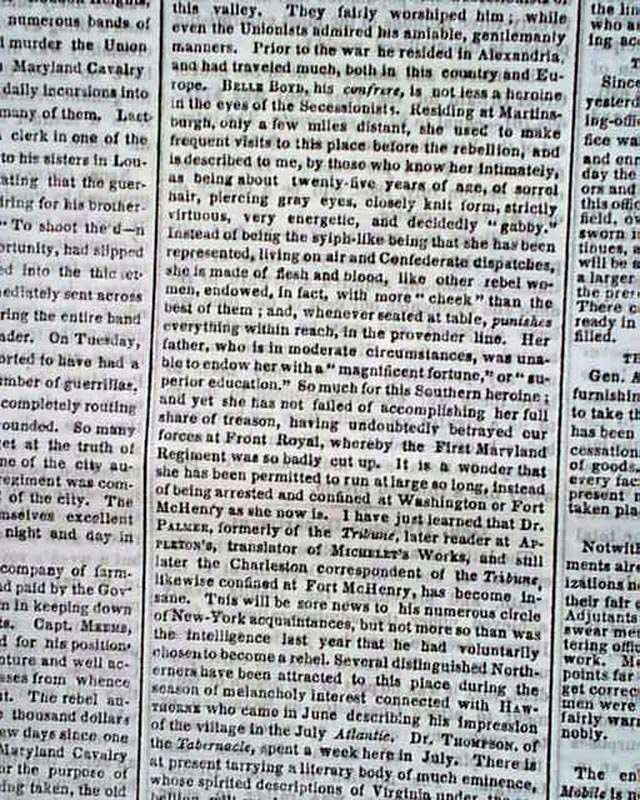 Page 3 has: "FROM HARPER'S FERRY" containing coverage of "the Confederate spy, Belle Boyd", with a full description which includes: "being about twenty-five years of age, of sorrel hair, piercing gray eyes, closely knit form, strictly virtuous, very energetic, and decidedly 'gabby' ". The article goes on to say: "Her father, who is in moderate circumstances, was unable to endow her with a 'magnificent fortune', or ' superior education'. So much for this Southern heroine; and yet she has not failed to accomplishing her full share of treason, having undoubtedly betrayed our forces at Front Royal, whereby the First Maryland Regiment was so badly cut up".
The front page has the following single-column headlings: "NEW-ORLEANS", "The Effects of the Battle of baton Rouge Upon the People of New-Orleans", "GEN. BUTLER'S REPLY", "FROM THE ARMIES IN VIRGINIA", "Movements of the Army Under General McClellan", "AFFAIRS IN KENTUCKY", and more.
Complete in 8 pages, in nice condition.