Home > Cornwallis surrenders at Yorktown... report from the French...
Click image to enlarge 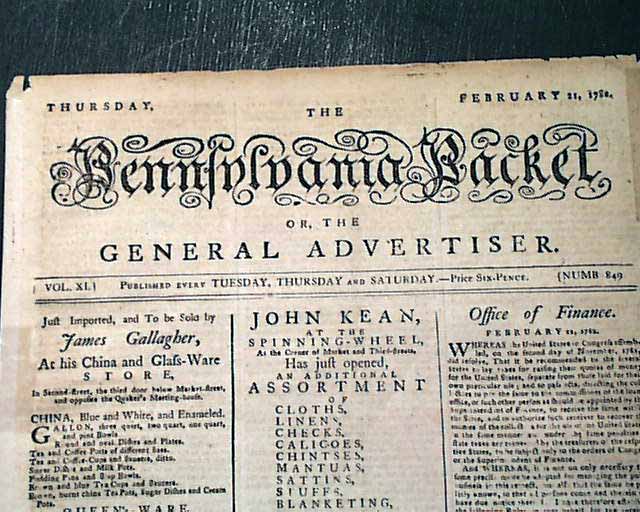 Cornwallis surrenders at Yorktown... report from the French...


THE PENNSYLVANIA PACKET, Philadelphia, Feb. 21, 1782  Page 2 has an extremely significant & historic report from Versailles which has the "Substance of a journal of the operations of a French corps under the command of count de Rochambeau...since the 25th of August last." which includes details of the surrender of Cornwallis at Yorktown. The report comes from the supplement to the French Gazette of November 20.
The text includes in part: "On the 14th of September, general Washington, myself and the chevalier de Chattelelux, arrived at Williamsburg where we found the marquis de la Fayette...Lord Cornwallis was employed in entrenching himself at York & Gloucester, barring the river of York with some of his ships...On the 20th, the allied army marched from Williamsburg at break of day for York-Town...On the 3d of October the sieur de Choisy marched to block up Gloucester...Tarleton was with 600 men in this post...forced the detachment to return to Gloucester...The entrenchments were opened in two attacks, above & below York river, in the night between the 6th and 7th of October, and different engagements took place till the 17th, when the enemy began to come to a parley. The capitulation was signed on the 19th in the morning, by which lord Cornwallis & his whole army were made prisoners of war. The American and French troops took possession of the redoubts at noon. The garrison of York Town filed off at two o'clock by beat of drum, with their arms, which were then piled up, with 20 pair of colours. The same took place at Gloucester...and colonel Laurens have drawn up the articles of capitulation, in conjunction with two superior officers of lord Cornwallis's army. It is supposed there are about 6000 or 7000 prisoners, and about 170 pieces of cannon taken."
The same page has a report from the Caribbean which includes: "Yesterday arrived here form New York the schooner Polly...the intelligence by her is of the most gloomy cast. The brave Cornwallis has arrived at New York. His lordship had surrendered for want of ammunition; the heaviest artillery he had was one 24 pounder and some 18 pounders landed from the Charon frigate, to those was opposed a numerous train of battering cannon, well served & which kept up a constant fire in almost every direction by which they beat down his defences & killed & wounded several of his men. Several days previous to his surrender, he was reduced to the necessity of firing  nine pound shot...Lord Cornwallis was to take his passage in a fleet preparing to sail for England under escort of two ships...Soon after the surrender of lord Cornwallis, the British fleet under admiral Graves appeared of the Chesapeak..." with more (see). And at the bottom of the pg. is: "...with Philadelphia papers...they contain nothing remarkable except the mournful catalog of prisoners, ordnance & military stores, provisions, vessels etc. taken from lord Cornwallis by the combined forces of Washington and Rochanbeau."
There are several other war-related reports in this issue but they pale in comparison to the reports concerning Cornwallis' surrender.
Complete as a four page newspaper. There are many old tape mends near the margins which do stain but cause no loss of readability. The issue is archivally rejoined at the spine. There is no loss of text at any of the margins.