Home > The "Trial of the Century"...
Click image to enlarge 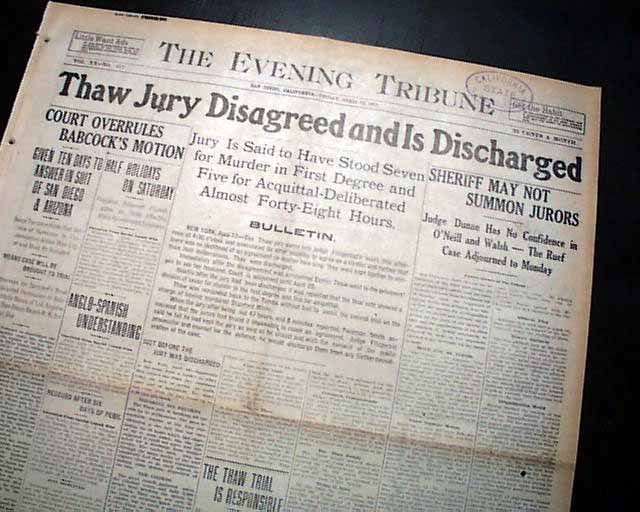 The front page has a nice banner headline: "Thaw Jury Disagreed and Is Discharged" with subheads. (see) Nice for display. Surprisingly this issue is in good condition being from the "wood pulp" era. Very hard to find issues that are not totally fragile from this era in paper.
Complete with 8 pages, small library stamp within the masthead, generally very nice.

wikipedia notes: Thaw was tried twice for the murder of White. Due to the unusual amount of publicity the case had received, it was ordered that the jury members be sequestered—the first time in the history of American jurisprudence that such a restriction was ordered. The trial proceedings began on January 23, 1907, and the jury went into deliberation on April 11. After forty-seven hours, the twelve jurors emerged deadlocked. Seven had voted guilty, and five voted not guilty. Thaw was outraged that the trial had not vindicated the murder, that the jurors had not recognized it as the act of a chivalrous man defending innocent womanhood. He went into fits of physical flailing and crying when he considered the very real possibility that he would be labeled a madman and imprisoned in an asylum.