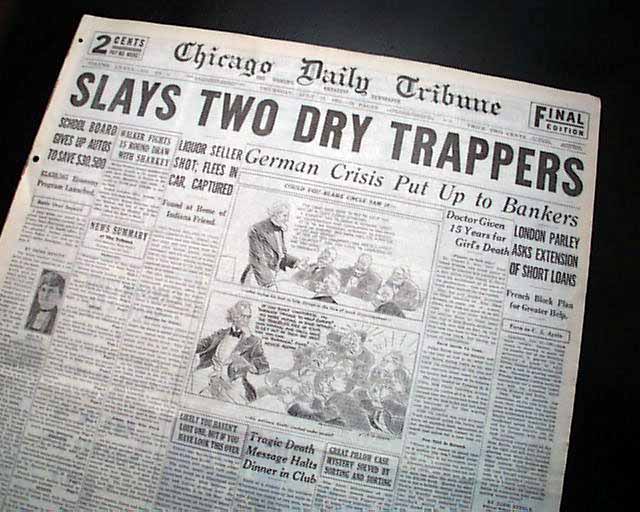 * Fort Wayne, Indiana alcohol war
* Prohibition & great depression
* Best title to be had - rare as such

The front page has a great banner headline concerning the prohibition wars in the Midwest: "SLAYS TWO DRY TRAPPERS" with subheads. (see) Nice for display.
When it comes to gangsters, organized crime, and the nefarious activities born out of the Prohibition and Great Depression eras, no city is more in the forefront of our minds than Chicago - and what better newspaper can be found than the Chicago Tribune, self-proclaimed to be "The World's Greatest Newspaper" - attributed in part to its dramatic, banner headlines! Whether hanging on your wall or part of an ongoing collection, these events are sure to capture the flavor of this infamous period in American history.
Complete with all 28 pages, this is the "rag edition" printed on very high quality newsprint meant for institutional holdings. In great condition as such, a few small binding holes at the blank spine.

source: Supporting Heroes: Prohibition Agents John Wilson, Oliver Cetteland and Walter Gilbert had arranged to make an undercover purchase of illicit liquor from George Adams in Fort Wayne, IN. Adams, a convicted felon, was on recent parole from prison for a previous Federal liquor violation. Agents Wilson and Gilbert were accompanied by additional agents in separate automobiles. They proceeded to the agreed upon meeting location, on the lower Huntington Road near Waynesdale, in Allen County. At the meeting site, Agent Wilson approached Adams' vehicle to consummate the purchase of liquor, but Adams apparently became suspicious and drew a .45 caliber pistol and threatened to kill him. Agent Gilbert, fearing for Wilson's safety, fired several shots through Adams' windshield slightly wounding him. Adams returned fire killing Agent Wilson. More gunfire was exchanged, during which Agent Gilbert was also shot and badly wounded. Adams wounded two other agents before making his escape. Agent Gilbert was rushed to Lutheran Hospital, but died that evening. Adams was captured by agents and police the following day.