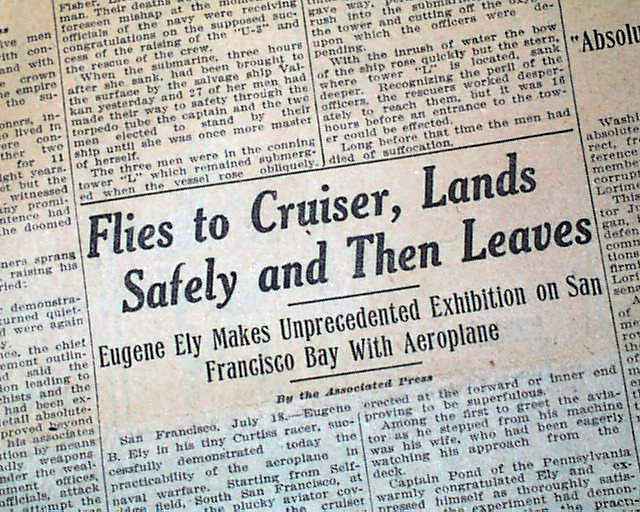 The front page has a two column heading: "Flies to Cruiser, Lands Safely and Then Leaves" with subhead: "Eugene Ely Makes Unprecedented Exhibition on San Francisco Bay With Aeroplane". (see) Surprisingly this issue is in good condition being from the "wood pulp" era. Very hard to find issues that are not totally fragile from this era in paper.
Complete with 10 pages, small library stamps within the masthead, irregular along the spine, generally very nice.

wikipedia notes: On January 18, 1911, Ely landed his Curtiss Pusher airplane on a platform on the armored cruiser USS Pennsylvania anchored in San Francisco Bay. Ely flew from the Tanforan Racetrack in San Bruno, California and landed on the Pennsylvania, which was the first successful shipboard landing of an aircraft. This flight was also the first ever using a tailhook system, designed and built by circus performer and aviator Hugh Robinson. Ely told a reporter: "It was easy enough. I think the trick could be successfully turned nine times out of ten."