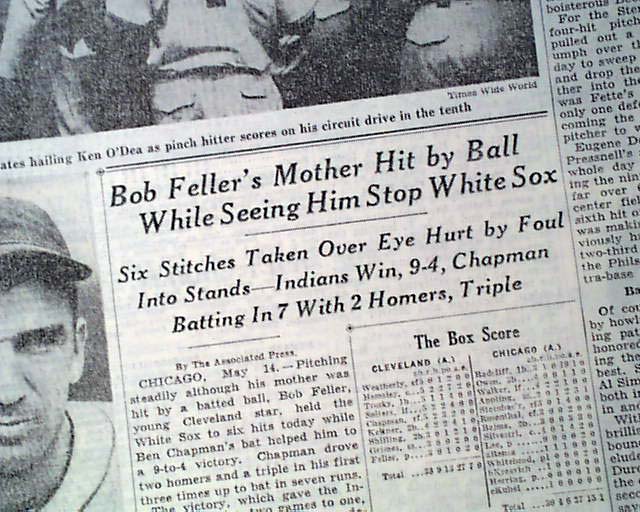 The sport's section (page 21) has a two column heading: "Bob Feller's Mother Hit by Ball While Seeing Him Stop White Sox" with subhead and box scores. (see) See below for the history of this bizarre event.
Other news, sports and advertisements of the day. Complete with all 36 pages, rag edition in nice condition.

source: Mother's Day and Baseball: Bob Feller was scheduled to take the mound on Mother’s Day, 1939, as the Indians played the Chicago White Sox in the Windy City.  Feller gave his mother a train ticket to Chicago and a ticket for the game. She had never before seen him pitch a Major League game.  She would finally get to see him pitch in the big leagues!
Mrs. Feller was seated in a box seat just above the Indians’ dugout, enjoying the game, when things went terribly wrong during the fourth inning.  Bob Feller hurled a fastball over the outside corner of the plate. White Sox third baseman Marv Owen fouled a line drive into the stands.  The ball struck Mrs. Feller between the eyes, breaking her glasses and knocking her out cold.  With seven stitches in her face and two black eyes, Bob’s mother spent the next two weeks in a Chicago hospital.