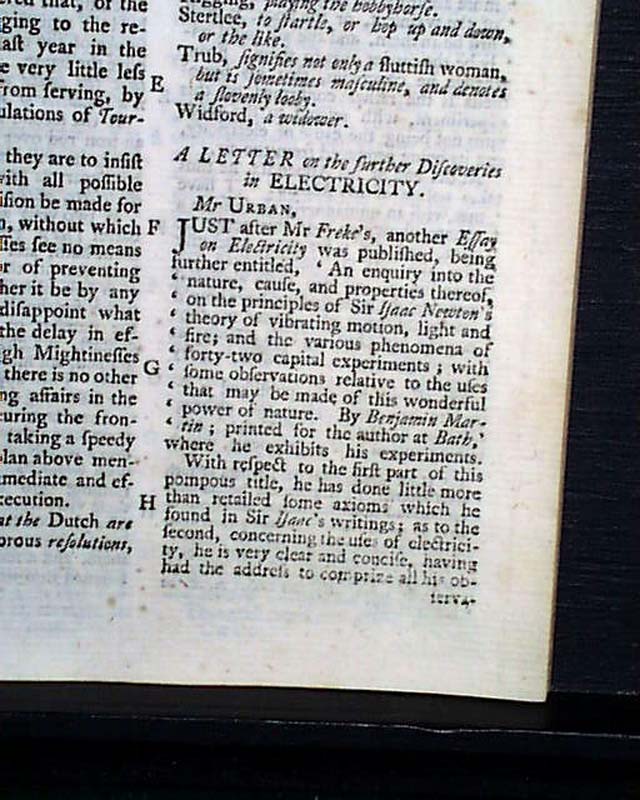 THE GENTLEMAN'S MAGAZINE, London, England, November, 1746  There is still content on the Jacobite Rebellion, with: "Rebels Tried at York". And near the back is half a page on: "Executed at York" (see photos). Also a report from the: "Boston Gazette" in America concerning the troubles with France in Louisbourgh and Cape Breton, Canada (see for portions). There is another letter from Nova Scotia.
Three pages are taken up with a List of Ships Taken" including several traveling to or from America.
There is an article: "Journal of the Expedition to Britany". This issue is lacking the plate called for.
Among other articles in this issue are: "Difficulty of Assembling a Sufficient Army" "Further Essays on Electricity" takes over 2 pages; "Proceedings against the Rebels at St. Margaret's Hill, Southwark" "Extract of a letter from Antigua"  many poems, etc.
Near the back is the "Historical Chronicle" which has various news reports from throughout Europe. Included is a report from "Boston in New England" (see photos).
Complete in 56 pages, measures 5 by 8 inches, full title/contents page featuring an engraving of St. John's Gate, and is in very good condition.