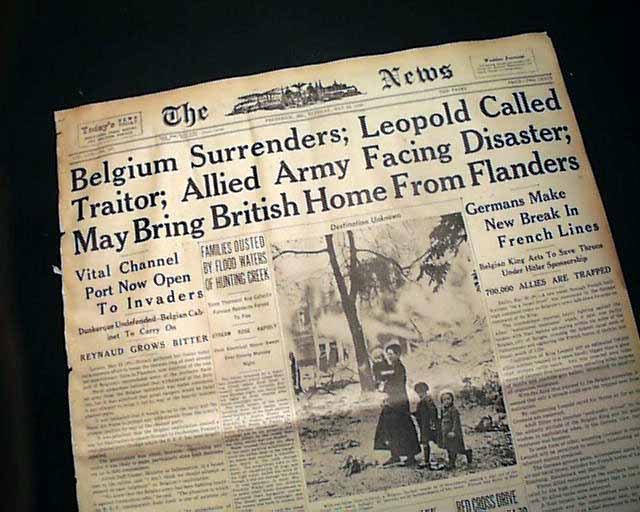 This 10 page newspaper has a nice banner headline on the front page:
"Belgium Surrenders; Leopold Called Traitor; Allied Army Facing Disaster" with subheads and related photo. Tells of the formal surrender of the country of Belgium to the Germans during World War II. Nice issue for display.

Other news of the day including various advertising. Complete with 10 pages, 17 by 22 1/4 inches, with minor spine wear, but otherwise in good condition.

wikipedia notes: On 24 May 1940, Leopold, having assumed command of the Belgian army, met with his ministers for what would be the final time. The ministers urged the king to leave the country with the Government. Prime Minister Hubert Pierlot reminded Leopold that capitulation was a decision for the Belgian government, not the king. The king indicated that he had decided to remain in Belgium with his troops, whatever the outcome. The ministers took this to mean that he would establish a new government under the direction of Hitler, potentially a treasonous act. Leopold thought that he might be seen as a deserter when he left the country: "Whatever happens, I have to share the same fate as my troops." Leopold had long had a difficult and contentious relationship with his ministers, acting independently of government influence whenever possible, and seeking to circumvent and even limit the ministers' powers, while expanding his own.