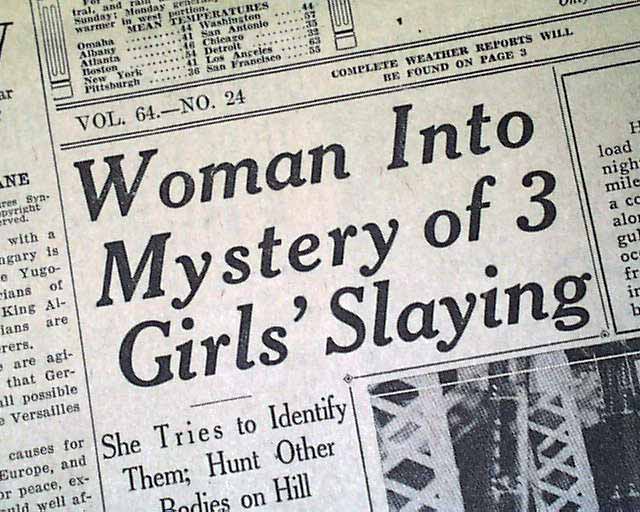 This 32 page newspaper has a two column headline on the front page:  "Woman Into Mystery of 3 Girls' Slaying", which tells of the "Babes in the Wood" murders near Pine Grove Furnace, Pennsylvania (see images). Other news of the day with period advertising throughout

wikipedia notes: On November 24, 1934, three young girls were found dead, wrapped in a blanket, in the woods of South Mountain between Pine Grove Furnace, Pennsylvania, and Huntsdale, Pennsylvania. The three girls were twelve-year old Norma Sedgwick, and her two half-sisters Cordelia and Dewilla Noakes. The girls were killed by Elmo Noakes (Norma's stepfather and Cordelia and Dewilla's father) and his niece and lover, Winifred Pierce. Noakes later killed Pierce and himself in a murder-suicide. It is believed that Elmo Noakes suffocated his children because he did not want to see them starve.