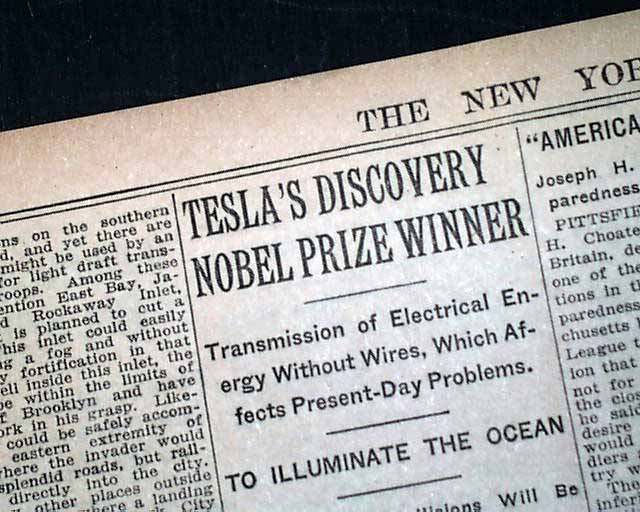 This 50+ page newspaper has one column headlines on page 17 that include: "TESLA'S DISCOVERY NOBEL PRIZE WINNER" "Transmission of Electrical Energy Without Wires, Which Affects Present-Day Problems" "TO ILLUMINATE THE OCEAN" and more (see photos).

Other news of the day throughout including various advertising. In good condition.

wikipedia notes: Since the Nobel Prize in Physics was awarded to Marconi for radio in 1909, Thomas Edison and Tesla were mentioned in a press dispatch as potential laureates to share the Nobel Prize of 1915, leading to one of several Nobel Prize controversies. Some sources have claimed that because of their animosity toward each other neither was given the award, despite their scientific contributions; that each sought to minimize the other's achievements and right to win the award; that both refused to ever accept the award if the other received it first; and that both rejected any possibility of sharing it.