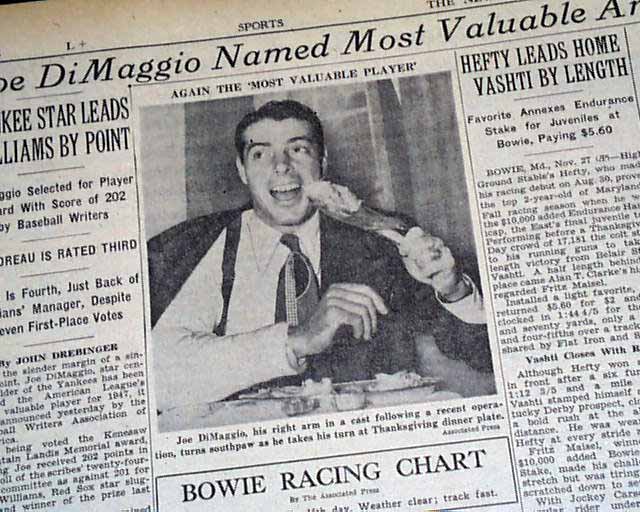 This 46 page newspaper has a banner headline on page 36: "Joe DiMaggio Named Most Valuable American League Player for Third Time" with subheads that include: "YANKEE STAR LEADS WILLIAM BY POINT" "DiMaggio Selected for Player Award With Score of 202 by Baseball Writers" and more with nice photo of DiMaggio. (see) Great to have in this famous NYC title.
Although not shown in the photos, page 29 also has coverage of the annual Macy's Day Thanksgiving Parade. The one column heading has: "2,000,000 THRILLED BY MACY'S PARADE", with subheads: "Gas-Filled Giants Prance Again to Delight of Throngs Who Forget Cold," "CLOWNS ADD TO THE FUN," and "Three Little Pigs, Peter Rabbit in the Line - Santa Claus Bestows a Greeting." Photos include a Gnome and a high-flying Panda (see image).
Other news of the day throughout. Light browning, otherwise in nice condition.