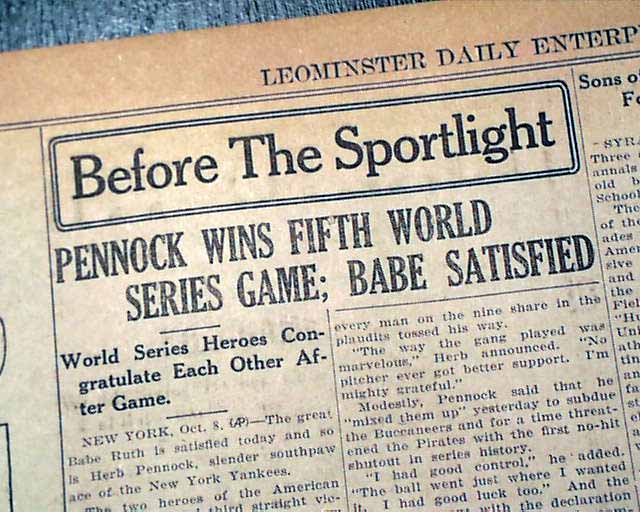 Tells of game 3 of the World Series between the New York Yankees and the Pittsburgh Pirates. This was the year the Yankees team was considered by many as the greatest of all time.

wikipedia notes: In the 1927 World Series, the New York Yankees swept the Pittsburgh Pirates in four games. This was the first sweep of a National League team by an American League team.

That year, the Yankees led the American League in runs scored, hits, triples, home runs, base on balls, batting average, slugging average and on base percentage. It featured legends Babe Ruth and Lou Gehrig at their peaks. The team won a then-league record 110 games, finished with a 19-game lead over second place, and are considered by many to be the greatest team in the history of baseball.

The 1927 Pittsburgh Pirates, with MVP Paul Waner, led the National League in runs, hits, batting average and on base percentage.

As legend has it, the "Murderers' Row" Yankees took a show-off batting practice before Game 1 in which they purposely rocketed as many as they could into the seats, while the Pirates team looked on. A stunned Lloyd Waner then turned to his older brother and opined, "They're big, aren't they?" Whether true or not (this was standard procedure for Ruth in any case), New York had little trouble dispatching Pittsburgh, who did not see another Series for 33 years.