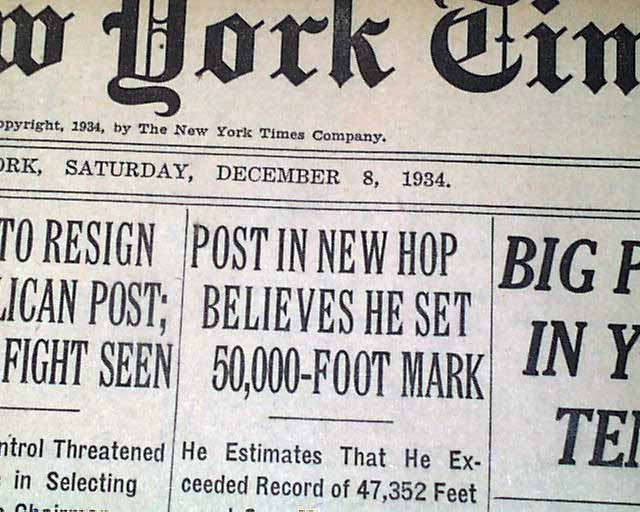 This 34 page newspaper has one column headlines on the front page that include: "POST IN NEW HOP BELIEVES HE SET 50,000-FOOT MARK" "He Estimates That He Exceeded Record of 47,352 Feet and Own Monday Height" "Oxygen Suit Functioned Without Mishap--Barographs May Show He Rose 57,000 Feet" and more. (see)

Tells of Wiley Post's record altitude airplane flight with his pressurized suit . This was also when he discovered the jet stream.

Other news of the day throughout. Light browning, otherwise good.

wikipedia notes: Wiley Hardeman Post (November 22, 1898 – August 15, 1935) was the first pilot to fly solo around the world. Also known for his work in high altitude flying, Post helped develop one of the first pressure suits. His Lockheed Vega aircraft, the Winnie Mae is on display at the National Air and Space Museum's Steven F. Udvar-Hazy Center adjacent to Dulles International Airport in Chantilly, Virginia, and his pressure suit is being prepared for display at the same location. On August 15, 1935, Post and American humorist Will Rogers were killed when Post's plane crashed on takeoff from a lagoon near Point Barrow, in Alaska.