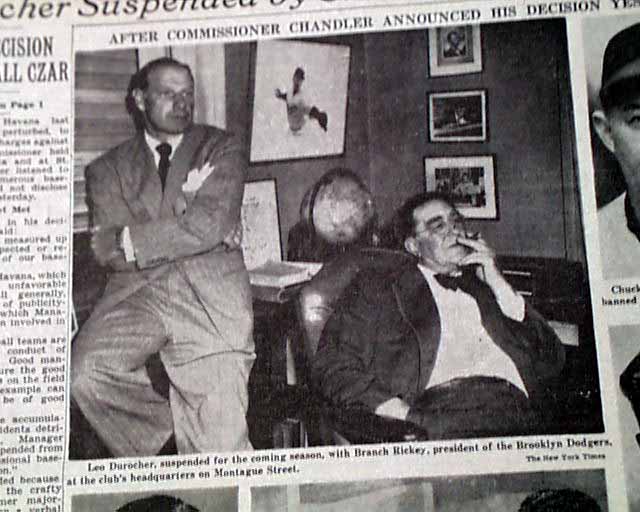 This 52 page newspaper has a two column headline on the front page: "Chandler Bars Durocher For 1947 Baseball Season".

Continues in the sport's section with related photos and complete text by Commissioner Chandler.

wikipedia notes: During spring training 1947, Durocher became involved in an unseemly feud with the new Yankee owner, Larry MacPhail. The Yankee boss had hired away two coaches from Durocher's 1946 staff (Chuck Dressen and Red Corriden) during the off-season, causing friction. Then matters got worse.

In person, Durocher and MacPhail exchanged a series of accusations and counter-accusations, with each suggesting the other invited gamblers into their clubhouses. In the press, a ghostwritten article appeared under Durocher's name in the Brooklyn Eagle, seeking to stir the rivalry between their respective clubs and accusing baseball of a double standard for Chandler's warning him against his associations but not MacPhail or other baseball executives.

Chandler was pressured by MacPhail, a close friend who was pivotal in having him appointed Commissioner, but the commissioner also discovered Durocher and Raft might have run a rigged crap game that took an active ballplayer for a large sum of money. (The player's identity was never confirmed officially, but a former Detroit Tiger pitcher, Elden Auker, wrote in his 2002 memoir that it was a then-current Tiger pitcher, Dizzy Trout.) Chandler suspended Durocher for the 1947 season for "association with known gamblers".

Before being suspended, however, Durocher played a noteworthy role in erasing baseball's color line. In the spring of 1947, he let it be known that he would not tolerate the dissent of those players on the team who opposed Jackie Robinson's joining the club, saying:

"I don't care if the guy is yellow or black, or if he has stripes like a fucking zebra. I'm the manager of this team and I say he plays."

He greatly admired Robinson for his hustle and aggression, calling him "a Durocher with talent." And Durocher liked to say of Eddie Stanky, the sparkplug on his 1951 pennant-winning Giants team,

Meanwhile, as Durocher sat out his suspension, the Dodgers won the NL pennant under an interim skipper, scout Burt Shotton. Then they lost the 1947 World Series to MacPhail's Yankees in seven games.