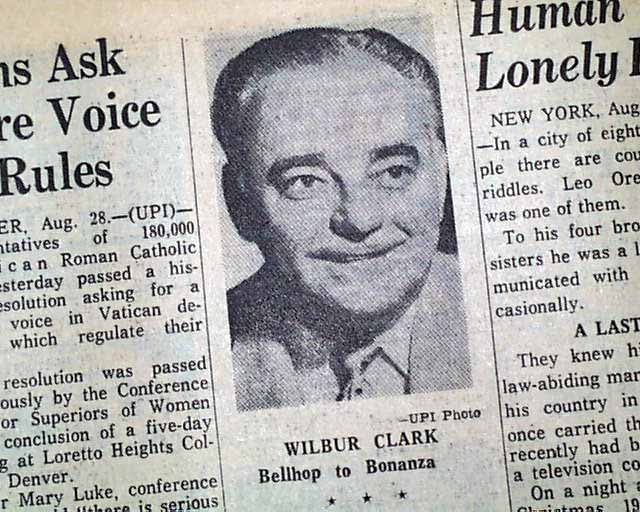 This 26 page newspaper has a one column headline on page 6-B: "Wilbur Clark, Hotel Man, Dies" with one column photo of Clark.

Other news of the day throughout. Little margin wear, otherwise in nice condition.

wikipedia notes: The original name was Wilbur Clark's Desert Inn. Wilbur Clark originally began building the resort, but when he ran out of money, the Cleveland mob led by Moe Dalitz took over the construction. Clark became the public frontman of the resort while Dalitz remained quietly in the background as the principal owner.

The Desert Inn’s most famous guest, billionaire Howard Hughes, arrived on Thanksgiving Day 1966, renting the hotel's entire top two floors. After staying past his initial ten-day reservation, he was asked to leave in December so that the resort could accommodate the high rollers who had been promised those suites. Instead of leaving, Hughes decided to start negotiations to buy the Desert Inn. On March 1, 1967, Hughes purchased the resort from Dalitz for around $13 million. This purchase was the first of many Las Vegas resort purchases by Hughes.

In 1997, the Desert Inn went through a $200 million renovation and expansion, giving it a new exterior with white stucco and clay tile roofs. Unlike other expansions, the 821 rooms were reduced to 715 to provide extra accommodations. The Palms tower was completed and the lagoon-style pool was also added. The seven-story lobby with a vaulted ceiling and large windows was also a major part of the renovation. The hotel was owned by Starwood Hotels & Resorts Worldwide until 1998. It was also owned for a time by MGM Grand Inc. in the late 1980s.

On April 24, 2000, the Desert Inn turned 50 years old, and celebrated with a full week of activities. There was a celebrity golf tournament with Susan Anton, Robert Loggia, Chris O'Donnell, Robert Urich, Vincent Van Patten, Tony Curtis, Rip Taylor and various local dignitaries, celebrities and media. A time capsule was buried in a custom-designed granite burial chamber on April 25, 2000, to be opened on April 25, 2050. Three days later, on April 27, 2000, the resort was purchased by Steve Wynn for $270 million, who closed it several months later.

On October 23, 2001, the main tower of the Desert Inn was demolished to make room for a megaresort that Wynn planned to build. Originally intended to be named Le Rêve, the new project opened as the Wynn Las Vegas. The remaining towers, The Palm and St. Andrews towers, was used as a small museum to display some of Wynn's art collection and as offices for Wynn Resorts. It was closed due to poor ticket sales. The Palms and St. Andrews Tower were the last towers and they were imploded on November 16, 2004. Each Tower was 7 years old at the time.

Desert Inn Road, an east-west Las Vegas Valley roadway, still exists. It is the only major east-west surface street on the Strip that does not connect to Las Vegas Boulevard. There are no current plans to rename the roadway at this time.

The Desert Inn was the last Strip hotel with its own golf course. It became part of Wynn Las Vegas, after a rebuilding associated with the new resort's opening.