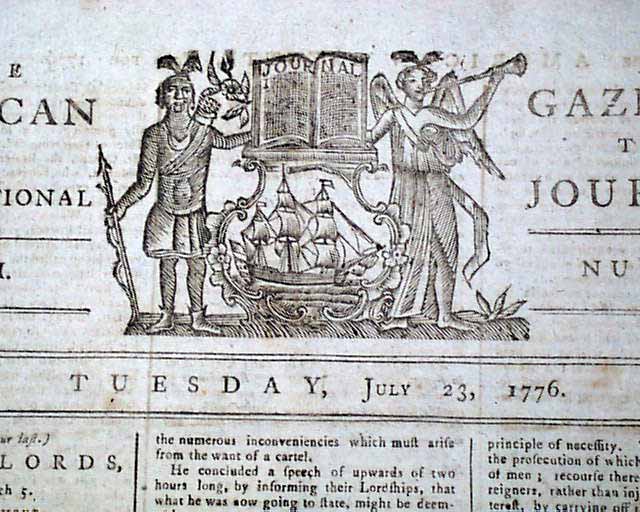 THE AMERICAN GAZETTE OR, THE CONSTITUTIONAL JOURNAL, Salem, Massachusetts, July 23, 1776.

The rarity of this title would seem to be sufficient for its desirability, as it lasted for just seven weekly issues, from June 18 thru July 30, 1776. (This issue is not for sale)  This issue is number six, the next to last issue ever printed.
But beyond the rarity is the very historic report found on the front page. Under the dateline of "New York, July 11" is a terrific item reading: "The first instant was rendered remarkable by the most important event that ever happened to the American Colonies, an event which will doubtless be celebrated through a long succession of future ages, by anniversary commemorations, and be considered as a grand era in the history of the American States--On this auspicious day the Representatives of Thirteen United Colonies, by the Providence of God, unanimously agreed to, and voted a Proclamation, declaring the said Colonies FREE and INDEPENDENT STATES, was proclaimed at the state house in Philadelphia, on Monday last, and received with joyful acclamations. Copies were also distributed to ALL the United Colonies--On Wednesday last it was read at the head of each brigade of the Continental Army posted at and near New York and every where received with loud hazza's, and the utmost demonstrations of joy."
This significant report is followed by one which is reported in most history books, reading in part: "The same evening the equestrian of George III, with Tory pride & folly raised in the year 1770, was by the Sons of Freedom, laid prostrate in the dirt, the just desert of an ungrateful Tyrant! The lead wherewith this mounting was made is to be run into bullets to assimilate with the brains of our infatuated adversaries, who, to gain a peppercorn, have lost an Empire."
As if this front page content was not sufficient, there is some great content on page 2 as well, including: "Thursday last, pursuant to the Order of the Honorable Council, was proclaimed, from the Balcony of the State House in Boston, the DECLARATION of the AMERICAN CONGRESS, absolving the United Colonies from their Allegiance to the British Crown, and declaring them FREE and INDEPENDENT STATES...at one o'clock the Declaration was proclaimed by the Sheriff of the County of Suffolk which was received with great joy expressed by three Huzzas from Concourse of people assembled on the occasion..." with more, including various toasts which were given supporting the American cause (see photos).
This joyful content found on both the front & back pages is tempered with some ominous reports which would foretell the great difficulties of the war effort for the remainder of 1776, one report datelined "New York, July 12, 1776" and begins: "The enemy are now in the harbor, although they have not yet ventured themselves within gun-shot of the city, but we hourly expect to be called to action..." with much more, as seen in the photos below.
A singlesheet newspaper with the imprint at the bottom of pg. 2, and an explanatory note from the publisher: "The publisher must apoligize for giving the public but half a sheet this week; at the same time he doubts not they will cheerfully excuse him...he was obliged to attend military duty yesterday...".
There are no advertisements in this issue. The issue measures about 10 by 15 1/2 inches, has a terrific & extremely displayable engraving in the masthead, has never-trimmed margins, and is in great condition.
Truly a choice & exceedingly desirable issue for both its rarity and its very historic content.

Two opinions on how peace should be n...