Home > Back to Search Results > Great print of a baseball game in progress...
Click image to enlarge 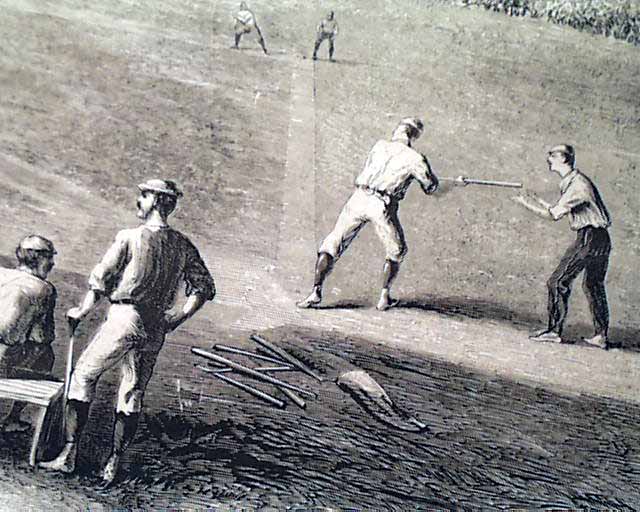 Great print of a baseball game in progress...


HARPER'S WEEKLY, New York, July 2, 1870  Certainly the prime feature of this issue is the upper half of a doublepage centerfold which shows an expansive view of a baseball game in progress, between the Brooklyn Atlantics and the Cincinnati Red Stockings. The caption reads: "Base Ball.--The Match Between the 'Red Stockings' and the 'Atlantics' " In this historic game the Atlantics defeated the Red Stockings 8-7. The victory by the Brooklyn team snapped the 84 game winning streak by the Red Stockings, which began the year prior. A report about the Red Stockings' tour against various New York teams appears on another page.
A nice print of one of the most famous baseball matches of the 19th century.
Other prints within this issue include: "Jerome Park--The Race for the Hunter's Plate" (other half of the centerfold); "Newton Experimenting With Light" on the front page; plus "William Gilmore Simms" "Red Cloud at Cooper Institute" taking half a page; "Great German Composers" and comic prints of: "The Yacht Fever".
Other news and advertisements of the day are included. Complete in sixteen pages.