Wreck of the RMS Titanic is found...

Beetle monoplane... On the Titanic... How mechanical toys work...

The Shocking Story of the Titanic Newspapers Told

The headlines on original Titanic newspapers were dramatic, frightening, and unforgettable.

âOver 1,200 Lives Probably Lost When Mammoth Steamer Titanic Is Sunkâ is one of the many dramatic headlines declaring one of the worst disasters in modern history. This headline is courtesy of the St. Paul Pioneer Press from April 16, 1912 (pictured below). Newspapers initially reported death tolls ranging from 1,200 to 1,800 before 1,517 was eventually announced as the death count. 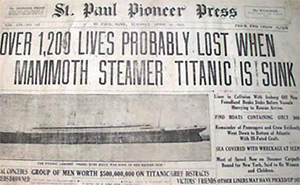 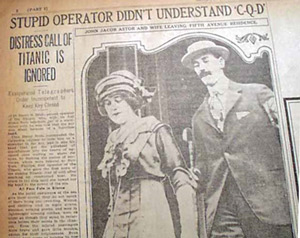 Page two from The Sunday Tribune, Los Angeles, CA dated April 21, 1912, showing John Jacob Astor and his wife below an angry headline. John Astor drowned but his wife was rescued.

The Titanic was quite a feat of engineering for 1912. A ship as large and lavish as the Titanic had never been built before. No one had ever seen anything like it. The great and well-known irony is that the Titanic was billed as âunsinkableâ and it sunk only 4 days after it set off on its maiden voyage. As the shock of the horrific news began to wear off, public outrage grew when reports of the shipâs safety issues and other failures began to emerge in subsequent newspaper reports. The Los Angeles Sunday Tribune headline from April 21, 1912, âStupid Operator Didnât Understand âC-Q-Dââ¦Distress Call of Titanic Ignored,â speaks to the raw emotion that emerged in some reports soon after the disaster.

“We have absolute faith in the Titanic. We believe that the boat is unsinkable.” —Phillip Franklin, Vice President of White Star Line speaking to reporters in New York on the morning of April 15, 1912. 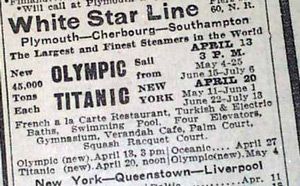 Advertisement for the return trip of the Titanic, from The New York Tribune, March 29, 1912.

An Original Titanic Newspaper of Your Own

Titanic newspapers continue to be widely popular and collectible items. Of particular interest are the newspaper advertisements for a trip on the Titanic that are available and relatively inexpensive. All of the Titanic newspapers we sell at Timothy Hughes Rare & Early Newspapers are guaranteed to be original and accurately described. We take great pride in being able to say that, and we hope you enjoy our selection of Titanic newspapers.

Contact us at 570-326-1045 or info@rarenewspapers.com and we will be happy to help you find a particular Titanic newspaper issue or another specific topic.