A report concerning the Great Plague...

Virginia mention in 1666, and mention of the Great Plague...

“History is never more fascinating than when itâs read from the day it was first reported.”

It might not be your first thought, but newspapers from the 1600s and 1700s are very similar content-wise to modern newspapers. Early newspapers contained reports on wars, natural disasters, listed items for sale, and published death notices. Sound familiar? Newspaper content hasnât changed drastically in 300-plus years. It is interesting to read accounts from this era and realize how similar we modern folk are to our ancestors. It seems that people at their core are mostly the same, and to this day, want to read news covering similar topics. That being said, some aspects of newspapers definitely have changed.

What has changed are the dimensions (smaller then, larger now), the number of pages (fewer then), paper quality (higher quality rag linen then), and the format. Newspapers of this period typically had an inflexible format, meaning that if page three was dedicated to foreign news, even if the most amazing foreign event occurred, it would appear on page three, not page oneâperiod.

Due to the time it would take to typeset and print an issue, breaking news of major events would often be printed on a separate sheet called an âExtraâ or an âExtraordinaryâ that was delivered with the daily issue or sometimes was not distributed until the following day.

News Gathering in the 17th and 18th Century

News editors and publishers often relied on ship captains to bring them newspapers from other cities. In exchange, the publisher would give the captain a stack of his own newspapers for distribution to other news editors the captain might encounter along his travels. Ship captains, on occasion, would provide eye witness accounts of natural disasters as well. Publishers, who were often desperate for content, regularly printed letters to the editor to help fill their newspaper pages.

The Revolutionary War creates considerable interest among those in the newspaper collecting world, nearly as much attention (in our view) as the Civil War draws. Regardless, the place of the Revolutionary War and its newspapers in American history is of unquestionable significance.

What makes newspapers from this era so special is that they provide us with first-hand accounts of the American Revolution against British authority. Accounts of famous battles like Lexington & Concord and Valley Forge and names synonymous with the Revolutionary War are all representedâGeorge Washington, Benjamin Franklin, Thomas Jefferson, and more. What better way to learn about history than from those who actually lived through it.

What surprises many is that the opportunity to own an original piece of American history can be had for less than $60. Most issues, regardless of price, are well-preserved since they were printed on durable rag linen paper that most newspaper printers used during this period. On the opposite end of the spectrum lie the Best of the Bestâa truly remarkable collection of Revolutionary War newspapers.

Visit our blog to learn more about collecting Revolutionary War newspapers and to gain further insight into the newspaper titles of the period, their content, and their influence. 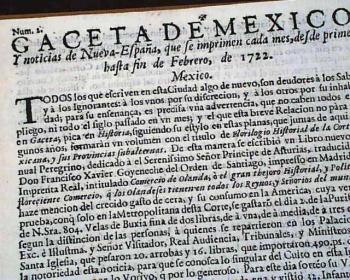 Issue #2 of Gaceta De Mexico, a very rare title and the oldest in all of North America. Dated February 1, 1722.

The First American Newspaper and a Very Rare Title

Benjamin Harris, from Boston, edited and published the American coloniesâ first newspaper, Publick Occurrences Both Forreign & Domestick. Harris published one issue before the Royal authorities suppressed it. Like many newspapers of the era, Publick reported on local news, crime, and gossip.

Other colonies started their own, more successful, newspapers but not until about 14 years later. Most colonial newspapers were simply titled using the colonyâs name followed by âGazette.â We compiled a list of the other 12 colonial newspaper titles with original publication dates.

The only known copy of Publick is on display at the National Archives of the United Kingdom in London.

An exceedingly rare issue within our inventory, which is the oldest newspaper title printed in North America, is Gaceta De Mexico, dated February 1, 1722. Itâs the oldest newspaper in the entire Western hemisphere, excluding Boston and Philadelphia. Issue #2 is pictured here. Issue #1 resides in our private collection and currently is on loan to The Newseum in Washington, D.C. 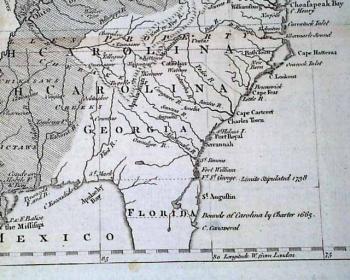 An early colonial-era map titled, "A Map Of the British And French Settlements In North America" from The Gentlemanâs Magazine. Original print date: July 1, 1755.

How Newspapers from the 1700s Were Printed and Distributed

The banner image at the top of this page shows a printer reviewing a freshly printed page while his apprentice operates the printing press. Almost all newspapers from this time were produced by print shop owners who printed other materials, such as lottery tickets, books, and pamphlets.

Each letter had to be individually set on the press. Typesetting was a painstaking process. For example, it took William Parks, who founded the Virginia Gazette, 25 hours of hand labor to set type for one newspaper page.

But the difficulties didnât end there.

Once printed, newspaper distribution was continually a problem. The postal system was slow, road conditions were poor, and most newspapers had few paid subscribers. It was common for one person to âsubscribeâ to the newspapers and then to pass it around to family, neighbors, and friends to read. Needless to say, the newspaper business was not a lucrative one.

Read more about how newspapers were printed in the 1700s at our blog, Historyâs Newsstand.

“Great inconveniences may arise by the liberty of printing.”

Top 10 Newspapers/Events from the 1600s and Earlier

Newspapers from the 1600s and newsbooksâ16th century precursors to newspapersâare scarce. Since American newspapers didnât exist until 1690, all newspapers from this time originated in Europe. Tim Hughes compiled a list of what he considers to be the most desired newspapers or events from the 1500s-1600s. Americaâs first newspaper (Publick Occurrences Both Foreign and Domestick), as mentioned previously on this page, made #1 on the list. The London Chronicle, London Times, Post-Boy, The Gentleman's Magazine, and an assortment of âcoffeehouse newspapers,ââlower end newspapers often read by the common manâare a few of the popular titles from the period.

Please enjoy reading about the newspapers and events that made Timâs top 10 list.