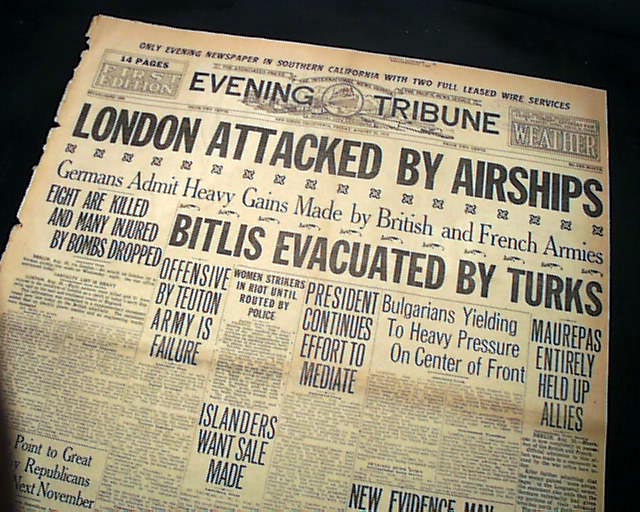 The front page has a nice banner headline: "LONDON ATTACKED BY AIRSHIPS" with subhead. (see) Nice for display. Surprisingly this issue is in good condition being from the "wood pulp" era. Very hard to find issues that are not totally fragile from this era in paper. Rare as such.
Complete with 14 pages, small library stamp within the masthead, a little irregular along the spine, generally very nice.

wikipedia notes: The sixth successful London raid was on 24/25 August, when 13 Navy Zeppelins set out and L31 reached London; flying above low clouds, 36 bombs were dropped in ten minutes on West Ferry Road, Deptford Dry Dock, the station at Norway Street and homes in Greenwich, Eltham and Plumstead. Nine people were killed, 40 injured and £130,203 of damage was caused. L31 suffered no damage in the attack but several weeks of repair work were needed following a hard landing.