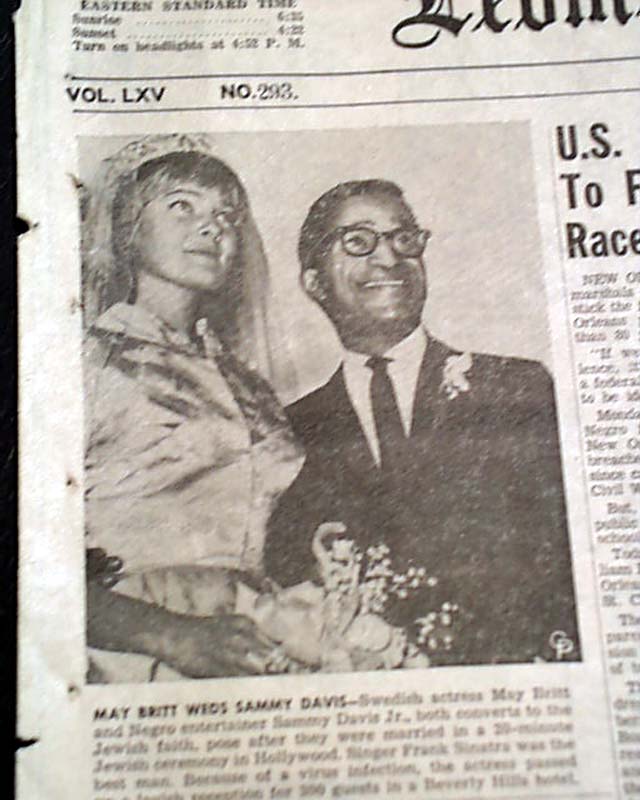 The front page has a two column photo with small heading: "May Britt Weds Sammy Davis" See below for some history on this event.
Complete with 10 pages, light toning at the margins, generally very nice.

wikipedia notes: May Britt met Sammy Davis Jr. in 1959. They began dating, and, after a brief engagement, were married on 13 November 1960. Their wedding caused controversy. A rumour or myth was that John F. Kennedy and Robert F. Kennedy told Frank Sinatra to tell Davis not to marry May until after the 1960 Presidential Election. At that time interracial marriage was forbidden by law in 31 U.S. states, and only in 1967 were those laws (by then down to 17 states) ruled unconstitutional by the U.S. Supreme Court. Prior to the wedding, Britt converted to Judaism. The couple was married by Reform Rabbi William M. Kramer. It has been confirmed, however, by Sammy and Britt's daughter Tracey, Nancy Sinatra, and documentarian Sam Pollard that this marriage resulted in President Kennedy rejecting an invitation for Davis to perform at his Inauguration. Yet, Harry Belafonte who was married to a white woman at the time, was invited to perform.