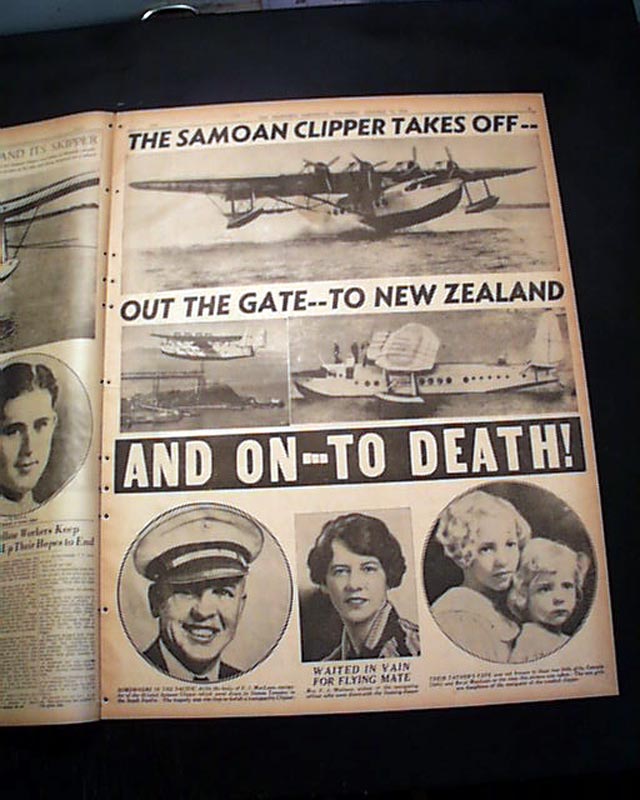 The front page has a nice headline announcing: "CLIPPER EXPLODED IN AIR ! CREW OF 7 KILLED BY FLAMES" with subheads and related illustration. (see) Much more on the following pages with photos.
Complete with all 28 pages, light toning at the margins, small binding holes along the spine, generally nice.

wikipedia notes: Samoan Clipper was one of ten Pan American Airways Sikorsky S-42 flying boats. It exploded near Pago Pago, American Samoa, on January 11, 1938, while piloted by famous aviator Ed Musick. Musick and his crew of six died in the crash. The aircraft was carrying only airmail and express freight; no passengers were aboard.
The aircraft developed an oil leak shortly after taking off from Pago Pago harbor, and the crew decided to return to port. However, the S-42, fully loaded with fuel, was too heavy to land safely in the limited space of the harbor, so the crew elected to dump fuel before landing. While fuel dumping was in progress, there was a fire and explosion which destroyed the aircraft, killing all aboard. The exact cause of ignition for the fire could not be determined.