Home > Prohibition starts in America in 1920....
Click image to enlarge 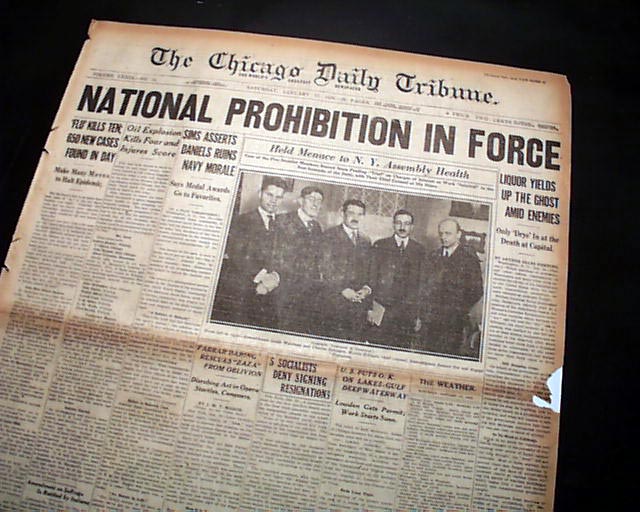 * Prohibition starts in United States
* No more beer or liquor (key date)
* From the city where crime would arise
* Best publication to be had ? (very rare)

The front page has a terrific banner headline: "NATIONAL PROHIBITION IN FORCE" with subheads. (see) Unfortunately a little wear along the right margin causes some text loss. (see) More on page 3 with a great photo of a coffin with a bottle of whiskey inside. (see)First report coverage on the official start of prohibition. This would lead to the gangland wars of Chicago in the 1920's and early 1930's. When it comes to gangsters, organized crime, and the nefarious activities born out of the Prohibition and Great Depression eras, no city is more in the forefront of our minds than Chicago - and what better newspaper can be found than the Chicago Tribune, self-proclaimed to be "The World's Greatest Newspaper" - attributed in part to its dramatic, banner headlines! Whether hanging on your wall or part of an ongoing collection, these events are sure to capture the flavor of this infamous period in American history.
Complete with 26 pages, light toning and a little wear along the margins and central fold, the mentioned wear that causes a little text loss, generally good.