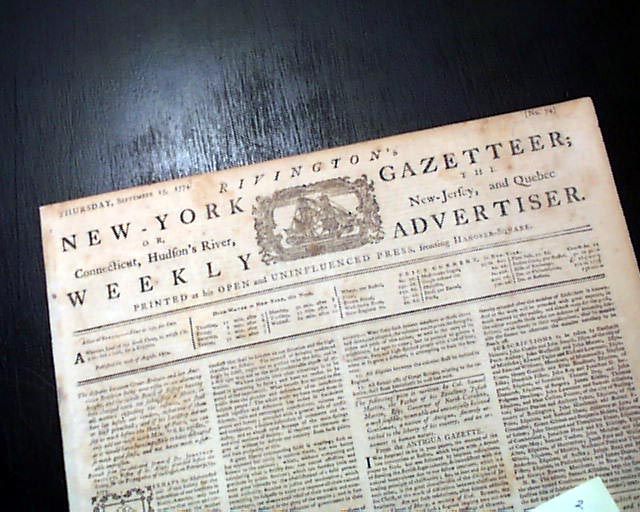 A rare & desirable Loyalist newspaper... Reacting to the Intolerable Acts...


RIVINGTON'S NEW-YORK GAZETTEER; or, the CONNECTICUT, HUDSON'S RIVER, NEW-JERSEY, and QUEBEC WEEKLY ADVERTISER, New York, Sept. 15, 1774  James Rivington, the famous printer of this newspaper, had an interesting career.
He began this newspaper in 1773 initially with an impartial stance which shifted as a revolution loomed and public opinion polarized, until by late 1774 he was advocating the restrictive measures of the British government with such great zeal and attacking the patriots so severely, that in 1775 the Whigs of Newport resolved to hold no further communication with him. The Sons of Liberty hanged Rivington in effigy. On May 10, 1775, immediately after the opening of hostilities, the Sons of Liberty gathered and mobbed Rivington’s wife's home and press. Rivington fled to safety while his office & press were destroyed, the lead type converted into bullets. Another mob burned Rivington's house to the ground.
In 1777 once the British occupied New York he returned with a new press and resumed the publication of his paper under the title of Rivington's New York Loyal Gazette, which he changed on 13 December 1777, to The Royal Gazette, with the legend “Printer to the King’s Most Excellent Majesty”.
This issue covers local reactions to the Intolerable Acts, the punitive legal measures implemented in 1774 by the British government following the Boston Tea Party. Also included are two inside page Proclamations signed in type by Thomas Oliver, the last Royal Lieutenant-Governor of Massachusetts Bay; a reference to the First Continental Congress then convening in Philadelphia; and a notice of reward for a runaway slave.

The front page begins with a prefacing note: "The disputes between Great Britain and her American brethren being now risen to an alarming height, and the whole bench of Bishops having been charged with too submissive a silence in all matters respecting the colonies..." which serves as an introduction to a sermon by Dr. Jonathan Shipley. It begins: "Perhaps the disinterested zeal of this society for the instruction of our brethren in North America may tend to revive that union and cordiality between the mother country and its colonies which for the common utility ought never to have been interrupted..." with much more.
The front page also has: "A Sixth Proposal of Dean Tucker's for Governing the Colonies: " prefaced with: "...to establish a form of government or compact between Great Britain and her Colonies, wherein the Power of the former and the Liberty of the latter shall be fairly and clearly ascertained..." and what follows is that plan.
And still on the front page is a great report concerning the sugar issue, and beginning: "I was surprized to see...the account of the late convention at Boston which began with a devout prayer to God, but was followed by impious resolutions of starving the British sugar colonies...".
Great content on pages 2 and 3 as well, too much to fully detail here but which is shown in the photos. One impassioned report ends with: "...the spirit of the people was never known to be so great since the first settlement of the colonies, as it is at this time. People in the country, for hundreds of miles, are prepared to 'DIE or be FREE,'"
This was an early use of the patriotic slogan "live free or die."
Another report from Boston details the sinking of a British cargo vessel: "...A vessel failed from England for Portsmouth, in New Hampshire, with Capt. Tate, having on board two hundred chests of the accursed East India Tea."
Inside pages also feature two proclamations issued by Oliver related to his resignation. Reacting to the removal of colonial gunpowder stores from the Charlestown Powderhouse, a mob of colonists surrounded Oliver's house and demanded that he give up his post as Lieutenant Governor. He stepped down, saying: “My house in Cambridge being surrounded by about four thousand people, in compliance with their commands I sign my name.”
Four pages, rejoined at the spine, very nice condition.