Home > Freedom of the Press goes to Supreme Court...
Click image to enlarge 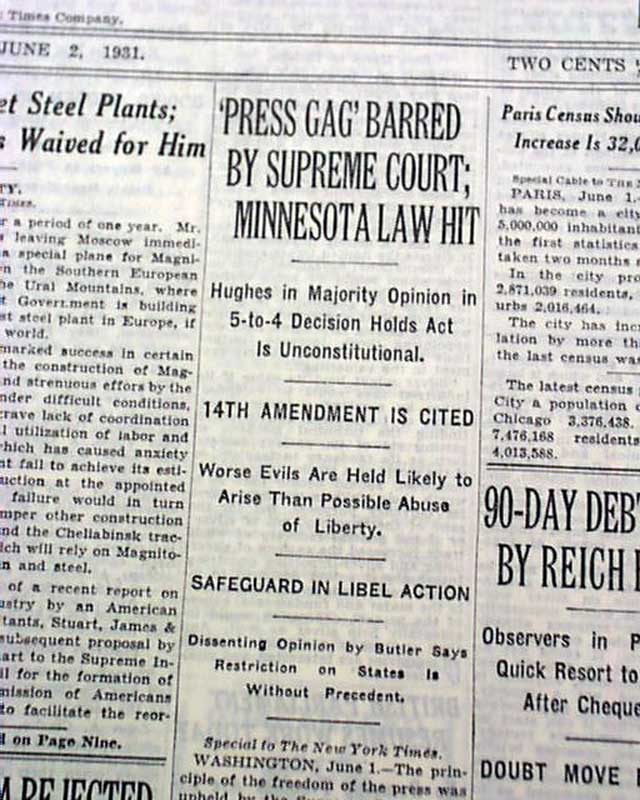 Freedom of the Press goes to Supreme Court...

* Near vs. Minnesota re. freedom of the press
* Landmark United States Supreme Court decision

The top of the front page has a one column heading: "'PRESS GAG' BARRED BY SUPREME COURT; MINNESOTA LAW HIT" with subheads. (see) Lengthy text continues inside. First report coverage on the Near v. Minnesota landmark United States Supreme Court decision.
Other news, sports and advertisements of the day. Complete in 60 pages, this is the rare rag edition that was produced on very high quality newsprint, with a high percentage of cotton & linen content, allowing the issues to remain very white & sturdy into the present. Given the subscription cost, libraries & institutions rather than individuals were the primary subscribers of these high-quality editions. A little spine wear, otherwise in very nice condition.


wikipedia: Near v. Minnesota was a landmark United States Supreme Court decision that recognized the freedom of the press by roundly rejecting prior restraints on publication, a principle that was applied to free speech generally in subsequent jurisprudence. The Court ruled that a Minnesota law that targeted publishers of "malicious" or "scandalous" newspapers violated the First Amendment to the United States Constitution (as applied through the Fourteenth Amendment). Legal scholar and columnist Anthony Lewis called Near the Court's "first great press case".