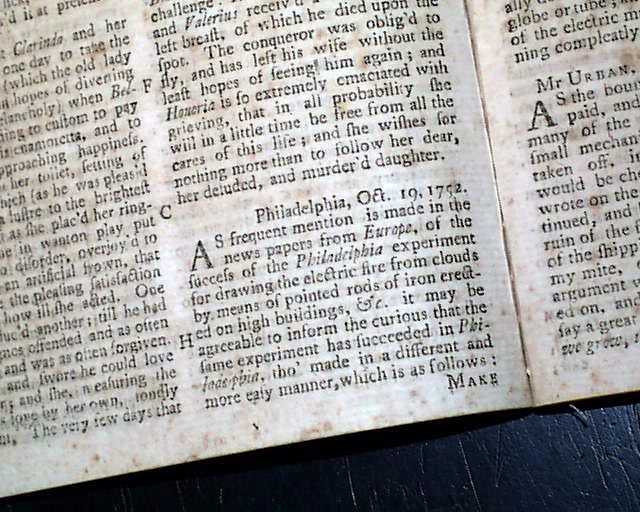 Inside has a terrific account of a legendary event in history--the famous kite experiment conducted by Benjamin Franklin. Note there is even mention of Franklin's name on the title page.
The article, datelined "Philadelphia, Oct. 19, 1752", begins by mentioning the reports about kite experiments, especially a different and easier one at Philadelphia: "...success of the Philadelphia experiment for drawing the electrical fire from clouds by means of pointed rods of iron erected on high buildings, &c., and it may agreeable to inform the curious that the same experiment has succeeded in Philadelphia, tho made in a different and more easy manner...". Hereafter are the detailed instructions provided by Benjamin Franklin explaining how to construct a kite using, among other materials, a silk handkerchief and a "pointed wire" that would extend from the frame of the kite. Once constructed the kite should be raised "...when a thunder gust appears to be coming on....As soon as any of the thunder clouds come over the kite, the pointed wire will draw the electrical fire from them....", and more about the results of the experiment. The article is signed in type: B.F., for Benjamin Franklin.
Contemporary accounts of this famous Franklin experiment are exceedingly rare outside of the Gentleman's Magazine.
Although there are other articles of interest in this issue, they pale in comparison to the Franklin item.
Near the back is the "Historical Register" with various news reports of the day which includes a full page: "Account of a Terrible Hurricane that Happened at Charles Town [Charleston], South Carolina" followed a few pages later by even further reports.
Included are the three plates called for, one of which is a plate of: "The Crested Fly Cather" bird, from Carolina which is hand water-colored & with some descriptive text.
Complete in 48 pages, full title/contents page featuring an engraving of St. John's Gate, 5 by 8 inches, great condition.