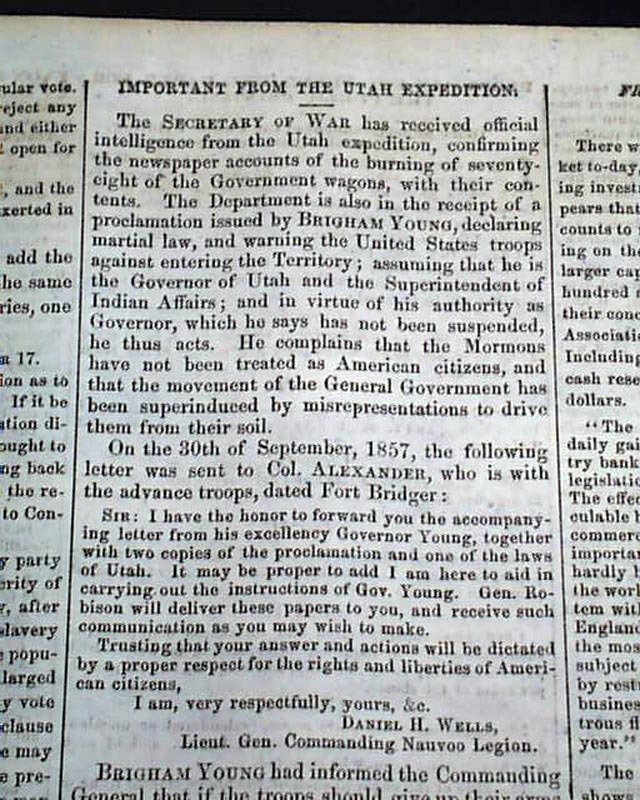 
DAILY NATIONAL INTELLIGENCER, Washington, D.C., Nov. 19, 1857  Page three has: "Important From The Utah Expedition" which includes official intelligence confirming the Mormon attack and burning of 78 of the government's wagons filled with military supplies. This event happend on October 5, during which no one was killed.
The report further notes: "The Department is also in receipt of a proclamation issued by Brigham Young, declaring martial law, and warning the United States troops from entering the territory..." with more.
A second letter affirms Brigham Young's willingness to provide the troops present with sufficient provisions to see out the winter on the condition they give up their arms and promise to depart in the spring.
A page 3 article has: "Movements Of the Mormons" which reports on the emigration of 900 men, women, and children from the Mormon colony in Carson Valley, Calif., to Salt Lake City, in obedience to the summons by Brigham Young. Yet another article: "Removal of the Mormons from California" provides the specifics of their journey.
Page 3 also has a brief article describing a lecture on Mormonism given by ex-Mormon elder John Hyde, Jr.