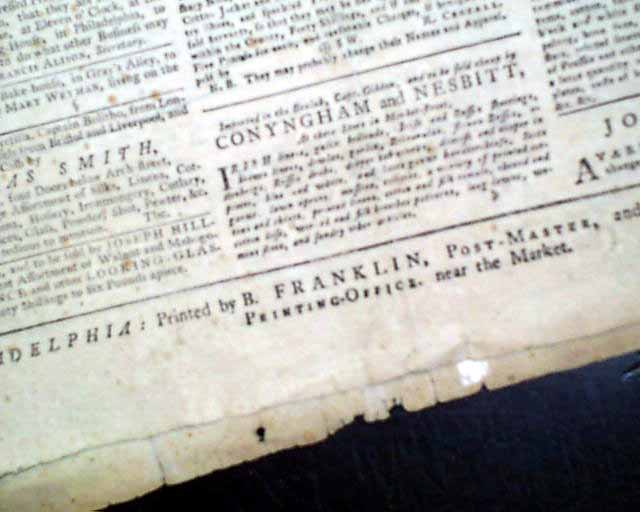 This is perhaps one of the most famous newspapers of the colonial era, almost entirely because it was printed by Benjamin Franklin as indicated by the imprint at the bottom of the back page which lists him by name, and identifies him as the Postmaster as well: "Printed by B. FRANKLIN, Post-Master, and D. HALL, at the New-Printing-Office, near the Market." (see)  Franklin's imprint only appeared in the Pennsylvania Gazette through 1765.
Virtually the entire front page is taken up with very nice & very detailed accounts of the trouble with the Creek & other Indian nations in the South, with a letter from the "Camp at Congarees" in South Carolina. More on pg. 2 as well.
Pages 2 & 3 have various reports on the French & Indian War including: "...from Sir William Johnson with the agreeable news that the siege of Quebec was raised with the loss of five thousand of the enemy..." with more on this. Also: "...that Major Rogers has had a very smart brush with the enemy..." & more (see). Yet another report from Charleston concerning the Cherokee and Creek Indians (see).
Four pages, never-trimmed margins, good condition.
A wealth of ads, so many that this issue has an extra full sheet filled with ads attached at the back, making this a 6 page issue. Just a bit of foxing, in very nice, clean condition. A fine opportunity for a Ben Franklin imprint on this famous newspaper.