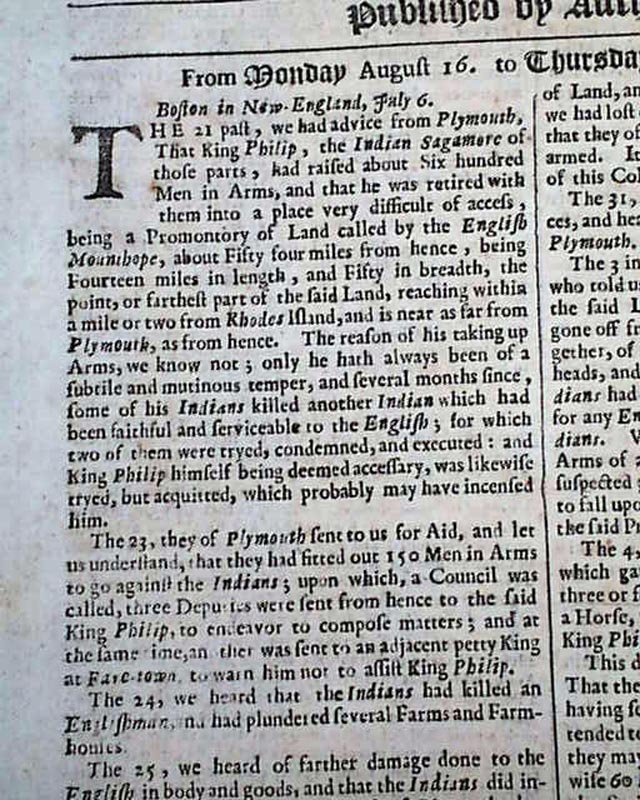 The significance of what is known as "King Philip's War" is lost with most Americans, but the event cannot be over-stated. This was America's first war, and the only newspaper in existence to report is was this title. As Wikipedia notes, this was an armed conflict between Native American inhabitants of present-day New England and English colonists and their Native American allies in 1675–78. The war is named after the main leader of the Native American side, Metacomet, known to the English as "King Philip".
The war was the single greatest calamity to occur in 17th century Puritan New England and is considered by many to be the deadliest war in American history. In the space of little more than a year, twelve of the region's towns were destroyed and many more damaged, the colony's economy was all but ruined, and its population was decimated, losing one-tenth of all men available for military service. More than half of New England's towns were attacked by Native American warriors.
Keep in mind that nearly all the English colonies in America were settled without any significant English government support, as they were used chiefly as a place of refuge or exile for religious minorities and other rebels in England. King Philip's War began the development of a greater American identity, for the colonists' trials, without significant English government support, gave them a group identity separate and distinct from subjects of the Monarchy and Parliament of England.
Over three-quarters of the front page is taken up with a lengthy, day-by-day account of the initial battles of the war, with a dateline of "Boston in New-England, July 6". It is noteworthy that no previous issue--nor any future issues for many years--would devote over three-quarters of a page to any American event.
Certainly a cornerstone issue for any collection of American wars, and very rarely offered. This is just the third issue we have encountered in 46 years.
Complete as a single sheet newspaper, 7 by 11 inches with uncommonly wide margins, in very nice, clean condition.