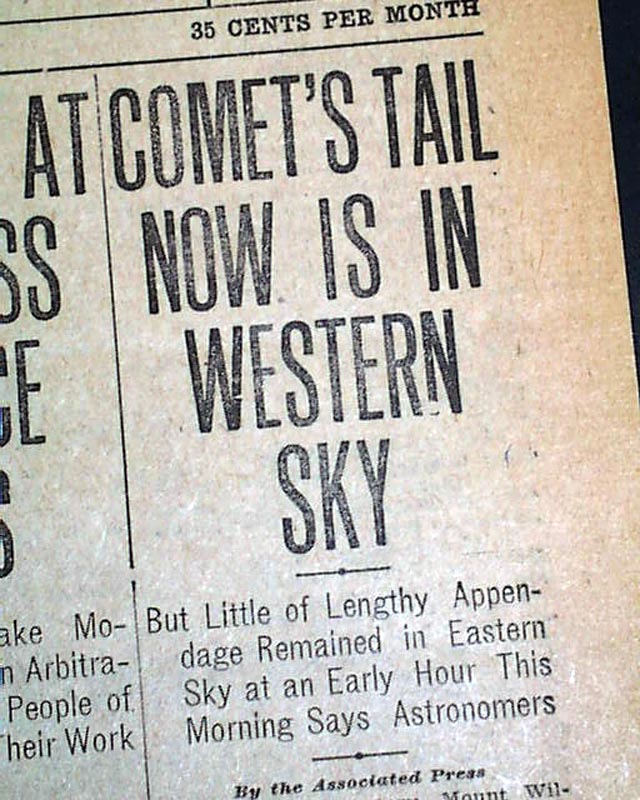 The top of the front page has a one column heading: "COMET'S TAIL NOW IS IN WESTERN SKY" with subhead. (see) Surprisingly this issue is in good condition being from the "wood pulp" era. Very hard to find issues that are not totally fragile from this era in paper.
Complete with 8 pages, 2 small library stamps within the masthead, some small binding holes along the spine, generally nice.

wikipedia notes: On 19 May, Earth actually passed through the tail of the comet. One of the substances discovered in the tail by spectroscopic analysis was the toxic gas cyanogen, which led astronomer Camille Flammarion to claim that, when Earth passed through the tail, the gas "would impregnate the atmosphere and possibly snuff out all life on the planet." His pronouncement led to panicked buying of gas masks and quack "anti-comet pills" and "anti-comet umbrellas" by the public. In reality, as other astronomers were quick to point out, the gas is so diffused that the world suffered no ill effects from the passage through the tail.