Home > Back to Search Results > Much on the Battle of Chickamauga...
Click image to enlarge 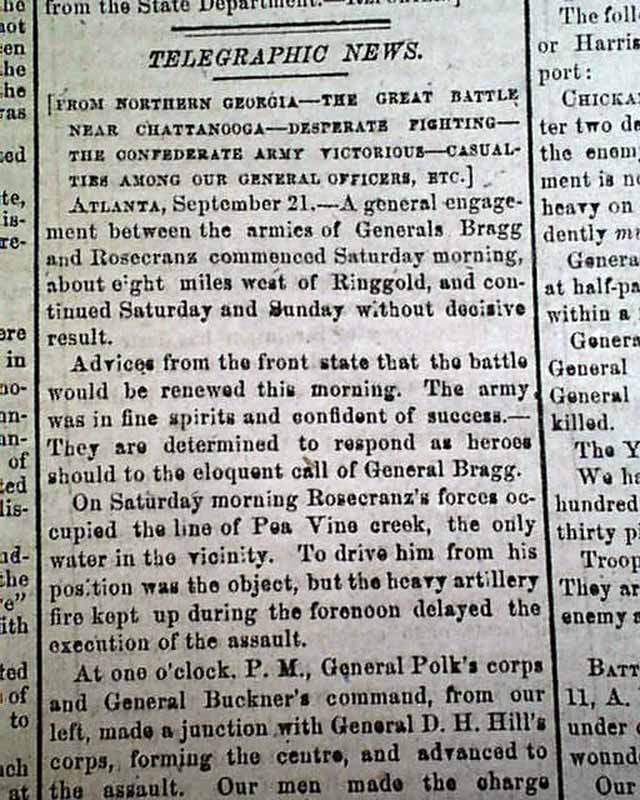 
DAILY RICHMOND EXAMINER, Virginia, Sept. 23, 1863  A nice newspaper from the capital of the Confederacy. The front page includes: "Death of Major-General Hood" [false report; he was wounded at Chickamauga & had his leg amputated, but he lived until 1879], "A Delegation fro the North-West" "From Northern Virginia" "The Interview Between the Commissioners" and some nice coverage of this historic Battle of Chickamauga: "From Northern Georgia--The Great Battle Near Chattanooga--Desperate Fighting--The Confederate Army Victorious--Casualties Among Our General Officers" which includes a dispatch signed in type: Braxton Bragg, which begins: "The enemy retreated on Chattanooga last night leaving his dead & wounded in our hands. His loss is very large in men, artillery...The victory is complete, and our cavalry is pursuing..." and more.
Not surprisingly the editorial on pafe 2 has much on the Battle of Chickamauga including: "Sing, for the Price of the Tyrant is Broken! Is it yet time to intone the anthem? If General Bragg's bulleetin is to be received with full confidence, we might safely do so. 'Our victory is complete', says the exultant General...The incomplete result is very glorious..." and much more.
Lengthy accounts under: "Latest From the North" report on the Battle of Chickamauga as well, with a subhead: "General Rosecrans's Campaign".
Nice to have this report of a major Confederate victory in a Confederate newspaper.
A single sheet issue with a full banner masthead, very nice condition.