Home > Washington & Gage on the treatment of prisoners...
Click image to enlarge 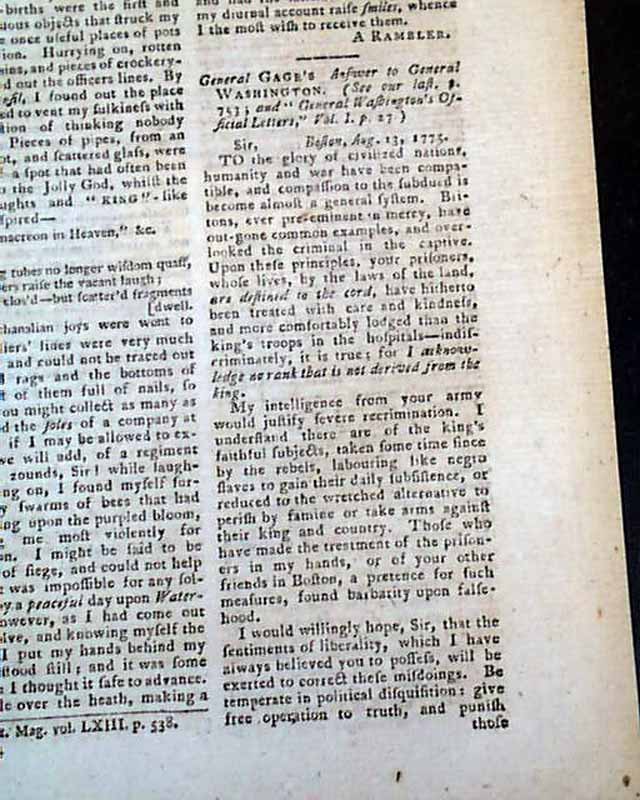 THE GENTLEMAN'S MAGAZINE, London,  November, 1795  Included is: "General Gage's Answer to General Washington" dated at Boston, Aug. 13, 1775, which is in response to Washington's complaint that American prisoners were being treated very poorly. Gage does in part: "...Britons, ever per-eminent in mercy...over-looked the criminal in the captive...your prisoners, whose lives by the laws of the land are destined to the cord, have hitherto been treated with care & kindness..." with more, signed in type: Thomas Gage. And this is followed by Washington's response, taking most of a page & signed in type: G. Washington.
Near the back: "Intelligence of Importance from the London Gazettes" begins with mention of the ratification of the Jay Treaty.
Both plates called for are present.
Complete in 88 pages, 5 1/2 by 8 1/2 inches, full title/contents page with an engraving of St. John's Gate, great condition.