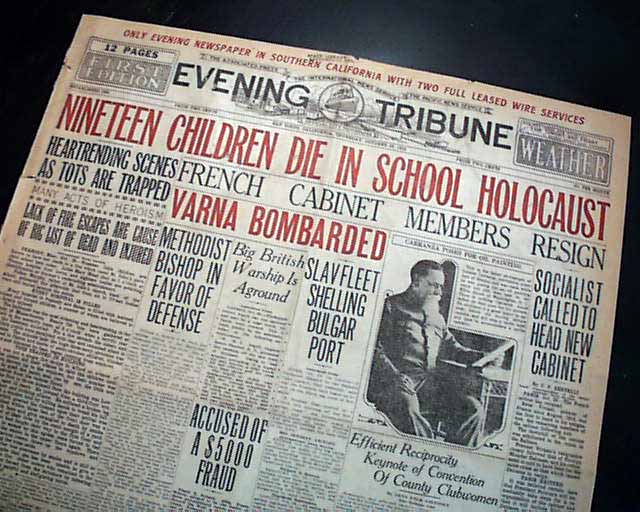 The front page has a banner headline in red lettering: "NINETEEN CHILDREN DIE IN SCHOOL HOLOCAUST" with subheads. (see) Nice for display. Surprisingly this issue is in good condition being from the "wood pulp" era. Very hard to find issues that are not totally fragile from this era in paper. Rare as such.
Complete with 12 pages, small library stamp within the masthead, irregular along the spine, generally nice.

wikipedia notes: On the morning of October 28, 1915, twenty-one young children were killed in the St. Johns School fire in the downtown area on Chestnut Street. The cause of the fire is believed to have been arson. Their bodies were found after the fire subsided, huddled together and burnt beyond recognition, near the entrance just steps away from survival. As a result, Peabody became the first city in the United States to establish a law that all entrances or exits in public buildings be push-open, rather than by handle or knob.