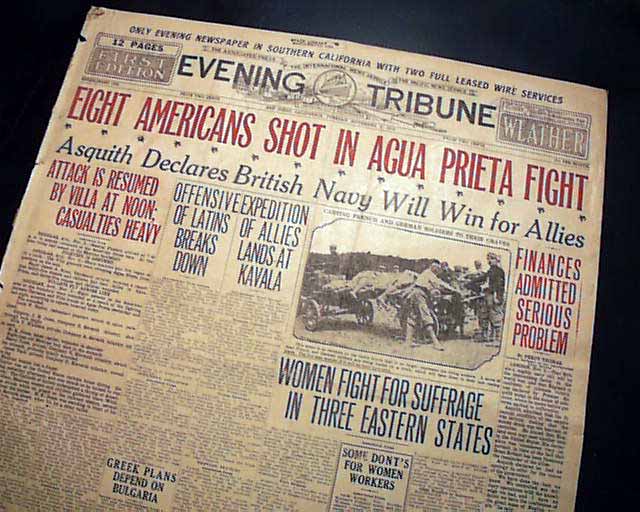 The front page has a nice banner headline in red lettering: "EIGHT AMERICANS SHOT IN AGUA PRIETA FIGHT" with subhead. (see) Nice for display. Surprisingly this issue is in good condition being from the "wood pulp" era. Very hard to find issues that are not totally fragile from this era in paper.
Complete with 12 pages, small library stamp within the masthead, a little irregular along the spine, generally very nice.

wikipedia notes: The Second Battle of Agua Prieta, 1 November 1915, was fought between the forces of Pancho Villa and those of the future President of Mexico, Plutarco Elías Calles, a supporter of Venustiano Carranza, at Agua Prieta, Sonora, as part of the Mexican Revolution. Villa's attack on the town was repulsed by Calles. The battle helped to establish Carranza's control over Mexico and directly led to his becoming, with United States recognition, president. Villa believed that Calles had received tactical and strategic support from the United States since the town is located across the border from Douglas, Arizona and launched his raid on Columbus, New Mexico partly as a reprisal.