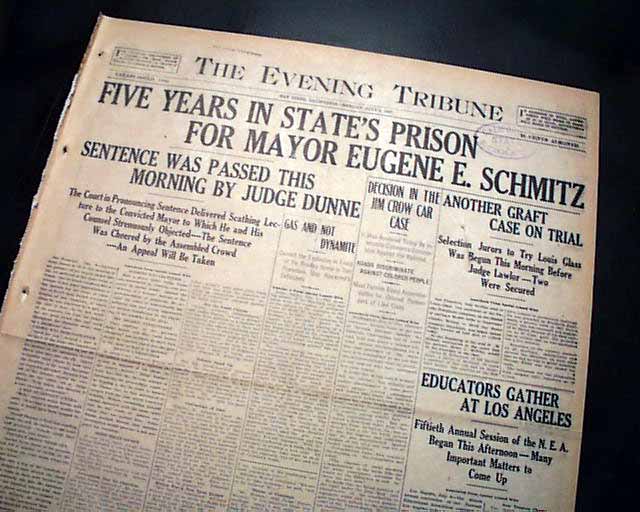 The front page has a nice banner headline: "FIVE YEARS IN STATE'S PRISON FOR MAYOR EUGENE E. SCHMITZ" with subheads. (see) Nice for display. Surprisingly this issue is in good condition being from the "wood pulp" era. Very hard to find issues that are not totally fragile from this era in paper.
Complete with 8 pages, small library stamp slightly affects the headline, a few small binding holes along the spine, generally nice.

wikipedia notes: On June 13, 1907, Schmitz was found guilty of extortion and bribery. The bribery scandal was one of the many San Francisco graft trials, which included Schmitz, Tirey L. Ford, and attorney Abe Ruef, who were receiving bribes. The office of mayor was declared vacant while he was sent to jail to await sentence. Shortly thereafter, he was sentenced to five years at San Quentin State Prison, the maximum sentence the law allowed. He immediately appealed; while awaiting the outcome, he was kept in a cell in San Francisco County Jail.