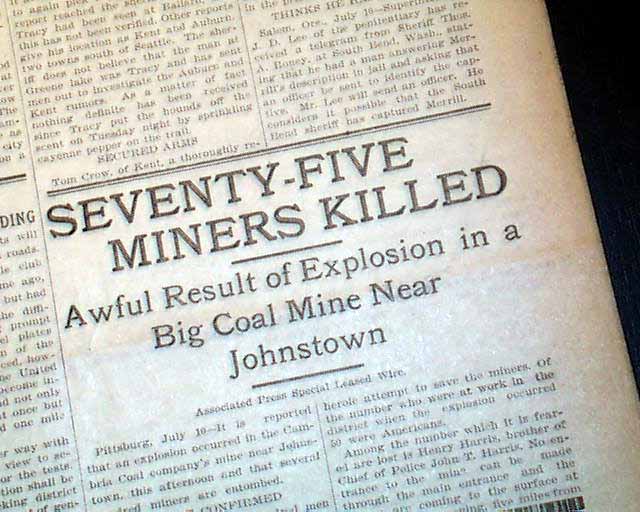 The front page has a two column heading: "SEVENTY-FIVE MINERS KILLED" with subhead. (see) Surprisingly this issue is in good condition being from the "wood pulp" era. Very hard to find issues that are not totally fragile from this era in paper.
Complete with 8 pages, small library stamps within the masthead, a few small binding holes along the spine, generally very nice.

wikipedia notes: On Thursday, July 10, 1902, at approximately 11:00 a.m., a powerful explosion occurred in the Klondike section of the mine, and ultimately 112 miners, 84 of whom were immigrants from England, Poland and Slovakia, lost their lives. The explosion was attributed to what miners refer to as firedamp, a methane gas mixture. Killed immediately were those miners working in the Klondike section. Many other miners, as well as the vast majority of mine animals, were killed by an asphyxiating gas called afterdamp that spread through the mine as they fled to the Millcreek Portal, several miles away, the only other exit from the mine. In fact, only seven of the deaths in the disaster were caused by the explosion; the rest were caused by afterdamp. The mine was re-opened on Monday, July 14, but the disaster devastated the immigrant community in Johnstown and provoked calls for investigations and greater safety measures from public officials and even foreign governments. The Rolling Mill Mine Disaster still ranks as one of the most deadly mining accidents in the history of the United States.