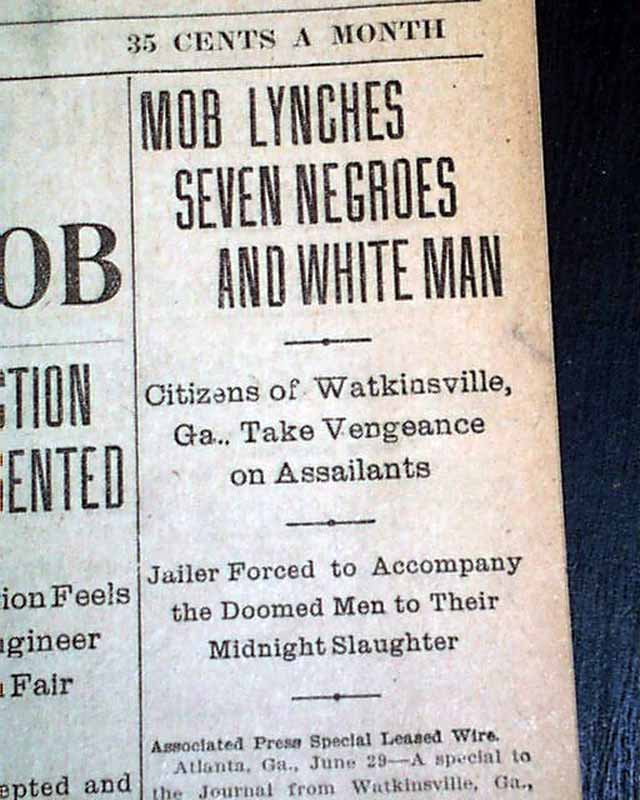 The top of the front page has a one column heading: "MOB LYNCHES SEVEN NEGROES AND WHITE MAN" with subheads. (see) Surprisingly this issue is in good condition being from the "wood pulp" era. Very hard to find issues that are not totally fragile from this era in paper.
Complete with 6 pages, small library stamps within the masthead, some residue from a label removed at the top center of the front page (see), otherwise nice.

wikipedia notes: In June of 1905, Watkinsville saw one of the worse outbreaks of racial violence ever in Georgia. In one instance, 8 men, 7 of whom were black, were pulled from a local jail and lynched. The lynching occurred due to two events. One of which was accusations that Sandy Price, one of the black males, assaulted a white woman named Weldon Dooley at her home in Watkinsville. Secondly, unsupported rumors spread that black males had killed a white couple known as the Holbrooks. This provoked the town people further. Price tried to flee from a crowd of angry locals, who chased and fired at him. He escaped the crowd of people, but was captured by the law and placed in jail. News of Price’s jailing reached the people and they begun planning his killing. People from the surrounding areas gathered together and forcefully retrieved the key to the jail cells from L.H. Alken, the Marshall of the local jail. According to two eyewitnesses, the mob tied the African Americans and one white man to posts outside the jail after retrieving them, then shot them multiple times with pistols, rifles, and shotguns. The only survivor of the killings was Joe Patterson, who was shot in the head and torso, but found still breathing by the crowd. One black male inside the jail, Ed Thrasher, was spared from the lynching.