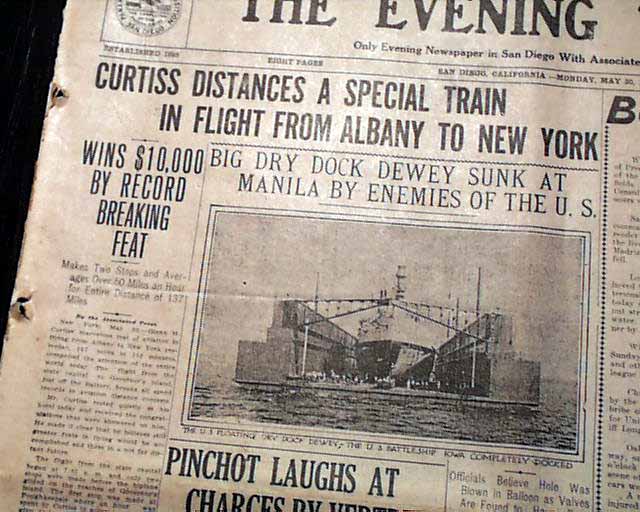 The top of the front page has a four column headline: "CURTISS DISTANCES A SPECIAL TRAIN IN FLIGHT FROM ALBANY TO NEW YORK" with subheads. (see) Surprisingly this issue is in good condition being from the "wood pulp" era. Very hard to find issues that are not totally fragile from this era in paper.
Complete with 8 pages, small library stamps within the masthead, a few small binding holes along the spine, generally very nice.

wikipedia notes: Glenn Hammond Curtiss was an American aviation and motorcycling pioneer, and a founder of the U.S. aircraft industry. On May 29, 1910, Curtiss flew from Albany to New York City to make the first long-distance flight between two major cities in the U.S. For this 137-mile (220 km) flight, which he completed in just under four hours including two stops to refuel, he won a $10,000 prize offered by publisher Joseph Pulitzer and was awarded permanent possession of the Scientific American trophy.