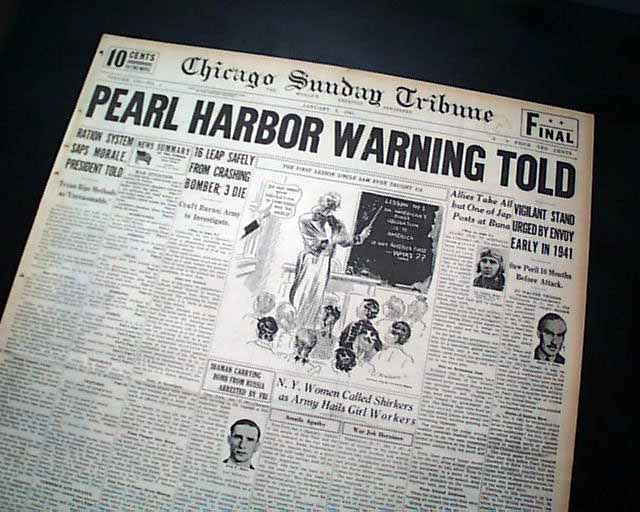 The front page has a nice banner headline: "PEARL HARBOR WARNING TOLD" with subheads and small photo of Joseph Grew, who was the United States Ambassador to Japan from 1932-1941. Nice for display. This was when this report was first made public to the American citizens.

wikipedia notes: On January 27, 1941, Grew secretly cabled the State Department with rumors passed on by Peru's Minister to Japan, that "Japan military forces planned a surprise mass attack at Pearl Harbor in case of 'trouble' with the United States." Grew's own published account of 1944 said, "There is a lot of talk around town [Tokyo] to the effect that the Japanese in case of a break with the United States, are planning to go all out in a surprise mass attack on Pearl Harbor.". Grew's report was provided to Admiral Harold R. Stark, Chief of Naval Operations, and Admiral Husband Kimmel, Commander-in-chief of the U.S. Pacific Fleet, but it was discounted by everyone involved in Washington and Hawaii.

Complete 1st section only with all 16 pages, light toning at the margins, some small binding holes along the spine, generally very nice.