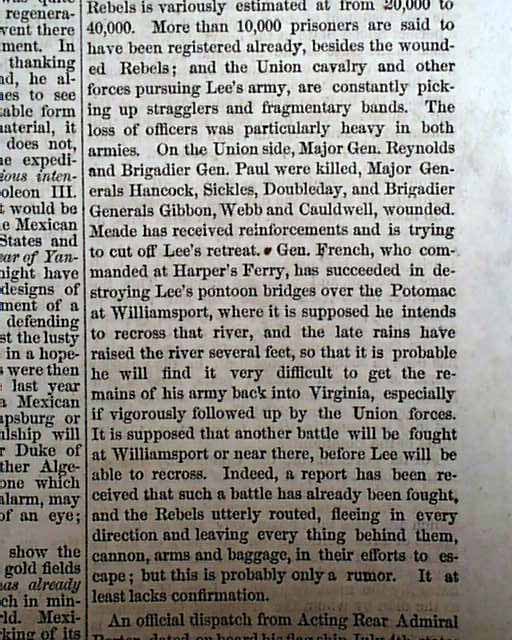 Page 3 has reports on the Civil War under the heading: "Late News", and includes some reports concerning the Battle of Gettysburg, the text beginning: "The past week has been full of interesting and important events. On Wednesday, Thursday, and Friday, the 1st, 2nd, and 3d of July, the "Army of the Potomac, under the new header, Gen. Meade, was engaged in a series of terrible battles with the Rebels under Lee, at Gettysburg, Pa., which resulted in the defeat of the Rebels and their retreat towards the Potomac..." with much more concerning the battle. This report carries over to page 3 as well.
The page 2 editorial is headed: "The Unity that is Coming" and begins: "It would be a glorious sight to see a whole nation like this, instead of being divided by factions and parties & engaged in war..." with much more.
From the famous Oneida Community in New York, an early "commune" in experimental living. Various religiously-themed content but a bit of reporting of news of the day as well.
Complete in 4 pages, never bound, several creases and scattered foxing, 12 1/2 by 17 1/2 inches, mild edge wear.