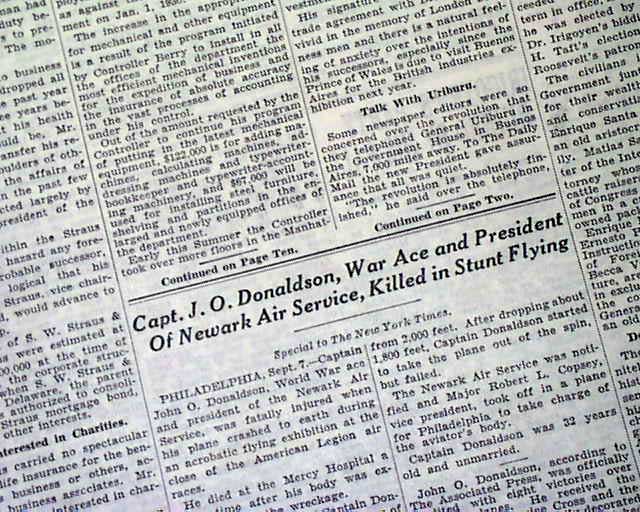 Near the bottom of the front page is a two column heading: "Capt. J. O. Donaldson, War Ace and President Of Newark Air Service, Killed in Stunt Flying" (see) First report coverage on the death of World War I flying ace, John Owen Donaldson. Always nice to have notable events in history reported in this World famous publication.
Other news, sports and advertisements of the day. Complete in 44 pages, this is the rare rag edition that was produced on very high quality newsprint, with a high percentage of cotton & linen content, allowing the issues to remain very white & sturdy into the present. Given the subscription cost, libraries & institutions rather than individuals were the primary subscribers of these high-quality editions. Nice condition.

wikipedia notes: Donaldson crashed while stunting near Philadelphia, Pennsylvania, on September 7, 1930, in an airplane borrowed from Opal Kunz. After tail-spinning in to impact, he was pulled from the wreckage with a fractured skull and internal injuries.[5] One newspaper account of the crash said: "The ship in which he crashed was the Travel-Air Whirlwind in which Mrs. Opal Kunz won the 25 mile free for all race on Saturday and which she had piloted to third place in the National Air Races in Chicago ten days ago. The airplane was completely demolished. The tremendous force of the crash telescoped the fuselage and snapped off the tail of the machine… Captain Donaldson was alive when Police Captain Brehan rushed across the field in a police car to his side. He was closely followed by Police Captain Dunn. Mrs. Kunz, a pupil of the pilot, also hurried across the field and helped in the extrication of his broken body… Vernie E. Moon of Maplewood, N.J., mechanican [sic] for Captain Donaldson, and who had been with him when he entered the plane for this aerobatic contest, was [also present] at the hospital.