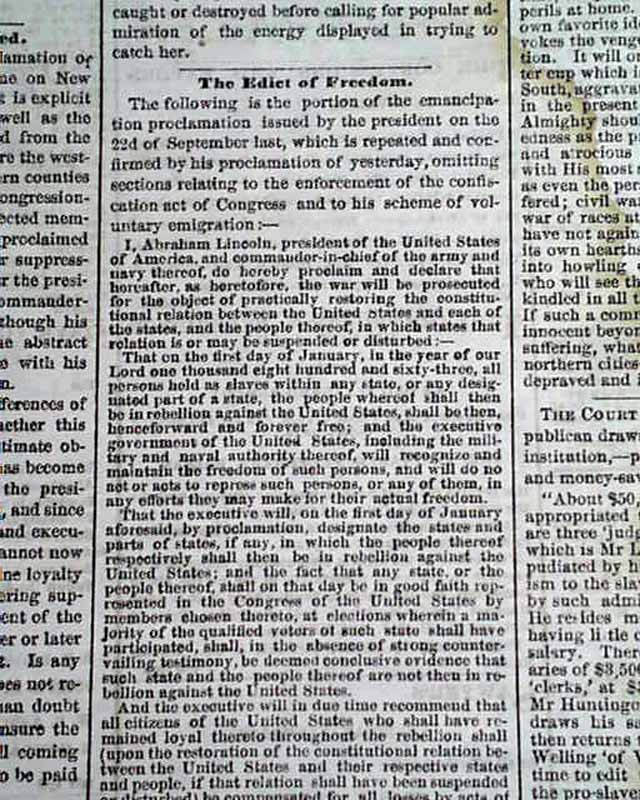 
SPRINGFIELD DAILY REPUBLICAN, Massachusetts, January 2, 1863  The back page begins with: "News By Telegraph" "News From Washington" "The Emancipation Proclamation". Hereafter is the text of the famous document headed: "By The President Of The United States Of America--A Proclamation." The text reads in part: "...That on the first day of January, in the year of our Lord one thousand eight hundred and sixty-three, all persons held as slaves within any state or designated part of a state...shall be then, thenceforth and forever free...", signed in type: Abraham Lincoln.
Page 2 has related editorial headed: "The Edict of Freedom" and "Emancipation Proclaimed" with the former having: "The negroes of New York had a grand jubilee on New Year's eve in Shiloh church, spending the night in prayer and praise & welcoming the opening of the year of emancipation...".
This proclamation officially became effective on January 1, and most newspapers of the day printed the text in the January 3 issue. January 2 printings are very rare and desirable as such.
Four pages, damp staining does not deter readability, very minor margin wear, generally good condition.