Home > Back to Search Results > Bust of Colonel Robert Shaw by a woman of African & Indian descent...
Click image to enlarge 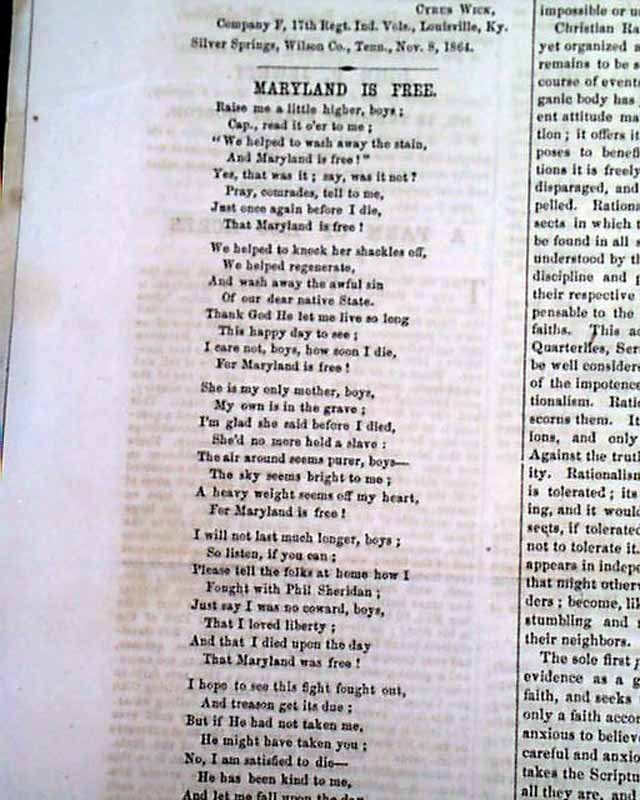 Bust of Colonel Robert Shaw by a woman of African & Indian descent...


THE LIBERATOR, Boston, Dec. 9, 1864  A very famous anti-slavery newspaper published by the noted emancipator William Lloyd Garrison. The ornate engraving in the masthead features three scenes: a slave auction, an image of Jesus breaking the bonds of the oppressors, and a slave family about to depart for their journey to emancipation.
The front page has: "Catholic View of Emancipation" "The Colored Race" "Matters & Things at Beaufort" & more, but the most significant content is on page 3 which has the: "Message of President Lincoln" which is Lincoln's annual state-of-the-union address, signed by him in type: Abraham Lincoln. It is prefaced with some editorial commentary on the speech.
Page 3 has what may be the most significant item:  "Bust of Col. Shaw"...described as:  "Among the thousand objects of interest at the Sailors’ Fair in Boston was a bust of the hero, Colonel Robert G. Shaw, by Miss Edmonia Lewis. 'Miss Lewis', says the Transcript, “is a young colored woman of African and Indian descent, who was educated at Oberlin College... Col. Shaw’s family consider it an excellent likeness... We are sure that many will be thankful to possess a touching and beautiful memorial of one of the ablest in our long list of brave and truthful souls who have gone thus early to their reward.”
Other items in this issue include: "Rebel Savagery" "Celebration of Freedom in Maryland" "Rebel Brutality" "Arlington Slaves Returned" concerning slaves kept by General Robert E. Lee; "Cruel Treatment of the Wives & Children of U.S. Colored Soldiers" which includes an: "Affidavit of a Colored Soldier" signed by him with his "X" mark, plus much more.
Four pages, never bound nor trimmed, mild wear at folds causes small holes at some fold junctures, bit of foxing, generally good.