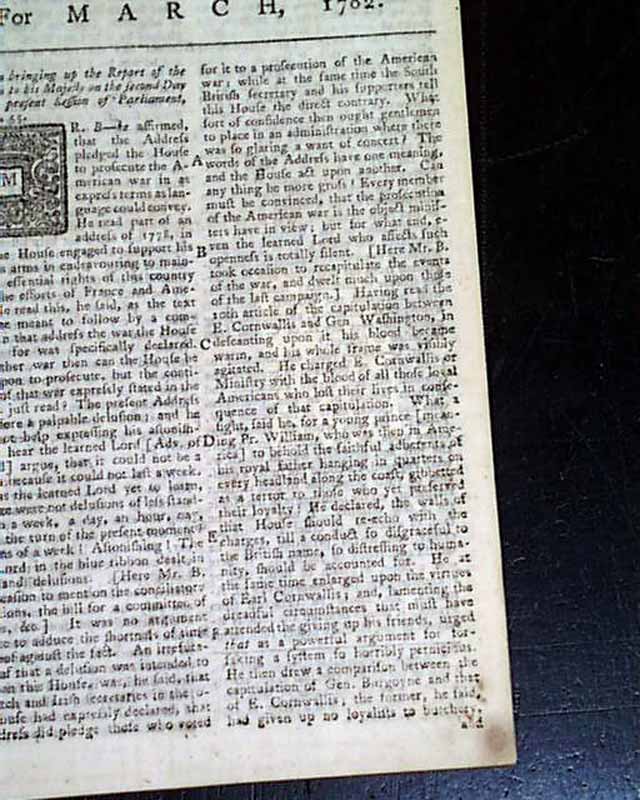 THE GENTLEMAN'S MAGAZINE, London, March, 1782  The issue begins with 8 pages of "Proceedings In Parliament" which begins with some mention of the Cornwallis surrender at Yorktown: "...Every member must be convinced that the prosecution of the American War is the object ministers have in view...Having read the 10th article of the capitulation between E. Cornwallis and Gen. Washington, in descanting upon it his blood became warm & his whole frame was visibly agitated. He charged E. Cornwallis or Ministry with the blood of all those loyal Americans who lost their lives in consequence of that capitulation..." with more.
Inside has a brief item beginning: "The French have been employed in fortifying York town in Virginia ever since the surrender of Earl Cornwallis's army...". And further on is a letter from Philadelphia which references Cornwallis's surrender: "...that the unjust & haughty treatment the inhabitants of York-Town in Virginia, & other parts of that country, have met with from the French army since the event of the 19th of October, has occasioned a strong debate in Congress upon the propriety of seeking an immediate truce with Great Britain for 3 years...".
Included are both plates called for.
Complete in 56 pages, 5 by 8 inches, full title/contents page with an engraving of St. John's Gate, very nice condition.