Home > The much desired "Who's A Bum!" newspaper...
Click image to enlarge 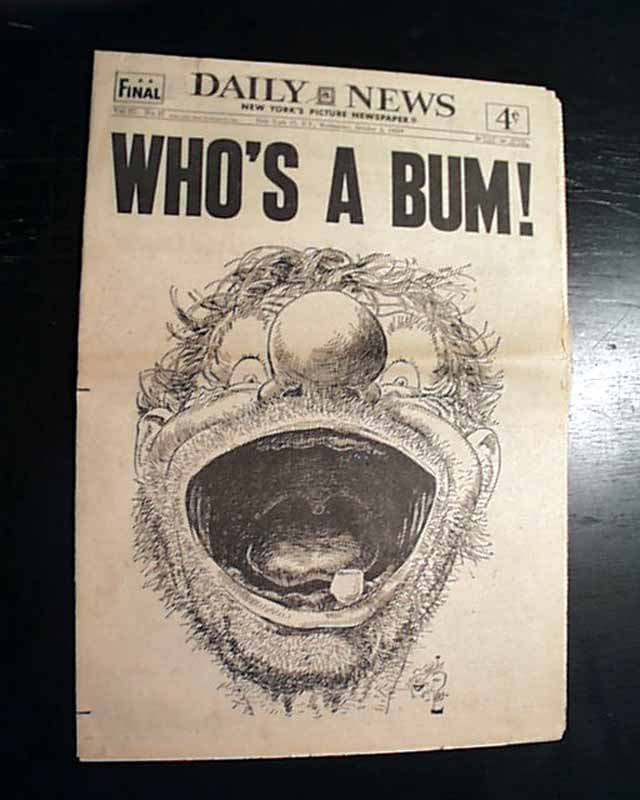 The much desired "Who's A Bum!" newspaper...

The entire front page is taken up with perhaps the most iconic baseball cartoon of all time, a comical cartoon of an open-mouthed "Brooklyn bum" fan declaring: "WHO'S A BUM!". [note: sportswriters in the early 20th century began referring to the Dodgers as the "Bums", in reference to the team's fans and possibly because of the "street character" nature of Jack Dawkins, the "Artful Dodger" in Charles Dickens' Oliver Twist.]
This cartoon & text celebrated the Brooklyn Dodgers winning their first World Series title over cross-town rivals the Yankees (and in Yankee Stadium no less) after years of ineptitude and heartbreak. The centerfold spread has many photographs of the game and the celebration including one of Yogi Berra embracing winning pitcher Johnny Podres. The full bkpg. is taken up with photos and headlines on the winning game as well.
This issue is missing many interior leaves as only those pages with pertinent information on the Dodgers are present. Specifically, pages present are 1, 2, 7, 8, 9, 10, 45, 46, 47, 83, 84, 85, 86, 91, and 92.
A very rare & exceedingly desirable newspaper. Light, even toning, minimal wear at margins, a very small & discrete repair at the top, generally in good condition and great for display.